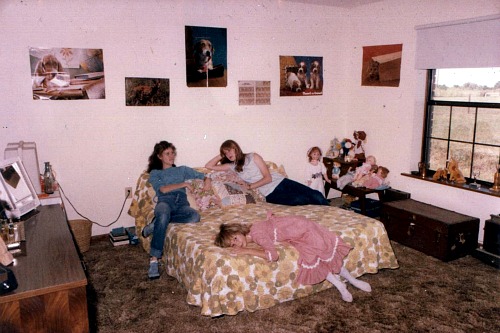 When I was little we lived in the country and, for a time, I was scared of the dark.  I remember waking up and hearing rattling noises in the middle of the night.  I would sit up in the dark and listen.  It was the sound of a plastic bag rattling, but in the dark I couldn’t see anything, and I was too scared to get up and turn the light on.  This happened night after night.  My parents reacted much like I do as a parent, “Oh, there’s nothing in your room; you’re fine.”

Still, I knew what I heard, and I knew those noises weren’t there when I went to bed.  One night I finally wised up and went to bed with a flashlight.  Again I woke up to the noises.  Trembling, I felt around for the flashlight and pushed the button.  I aimed the beam toward the sound.  The spotlight rested on my trash can–lined with a plastic sack!  There was something in my trashcan!  I stared as I held the light until my ghost or ghosts rather showed themselves.  Roaches!  They were having dinner each night in my trashcan!  Oh well, at least they weren’t on me.

I rolled over and slept soundly.  The next day with no roaches in sight, I got rid of the plastic sack that lined my trashcan and seemingly got rid of the roaches…at least they no longer woke me up at night!