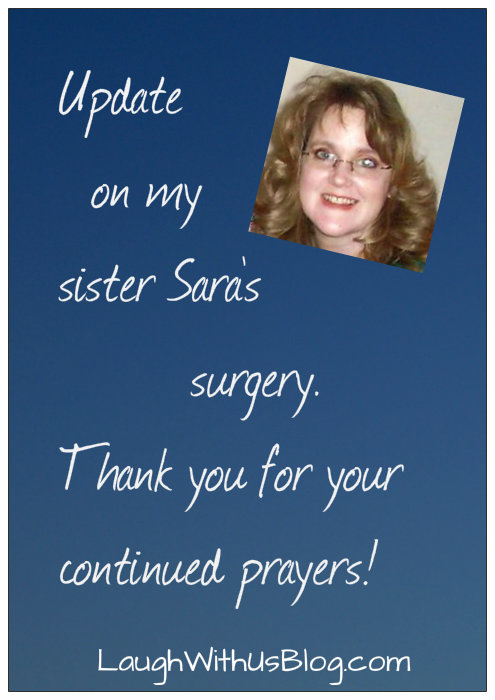 I want to thank you all so much for your continued prayers for my sister Sara!  It has been just over two months since Sara underwent surgery involving heated chemo for appendix cancer.  In my last update she had just been readmitted to the hospital after vomiting blood. She was in excruciating pain and battled constant nausea.

I must admit, I was scared.  I knew that couldn’t mean anything good, but thankfully doctors found and resolved the problem!  The CT scans showed pockets of fluid in her right side.  They were able to put in a drain and over time the problem was resolved!

She spent another two weeks in the hospital.  In addition to the drain, they switched her to IV nutrition to help with the nausea, and worked to control the pain.

She was then transferred to a long term health facility where Ashley, her daughter, continued to care for her.  She was well cared for, but desperately wanted to go home so she could be with her husband and 13 year old son as well.  We began praying for a miracle, and a week and a half later she was released to go home, though it was to be with continued home health care, she was so happy!

This last Tuesday was her latest doctor’s appointment back in Houston.  We were all, I think, a little worried about what the doctors would say.  Would they find something wrong?  Would she be readmitted to the hospital?  To our surprise and utter joy we received great news!  The PICC line was taken out as was the stomach tube!  She was to be able to go back home and without any more IV feedings or home health care!  I was so excited, I couldn’t help crying a little!

Sara continues to battle nausea and pain. She is on strict orders to eat more and exercise to gain strength. She still has a long way to go y’all, but so, SO great to see progress. Please keep her in your prayers!  And thank you ever so much for every prayer on her behalf!