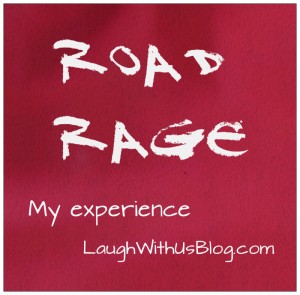 I made someone really mad today.  Argh!!!  I felt so bad.  As I was driving my boys to preschool, I pulled up to a red light.  I was turning right.  No traffic was moving at that moment so I figured, “Hey, I can go right on red,” and pulled into the intersection.  When I looked in my rear view mirror, all the cars that had been stopped to my left were now right on my bumper.  I had pulled out in front of them without meaning to. Their light must have turned green right when I pulled out.

I tried speeding up so that I wouldn’t slow everyone down.  That would have been fine except for the one guy in the black SUV that was on my bumper.  We were now way ahead of the rest of the traffic so I took my foot off the gas hoping that he would go around.  He did, but then he pulled up right beside me on my left and drove parallel with me.  I was in the far right lane and needed to turn left soon, so I slowed way down hoping he would go ahead, so I could get around him and turn left.  He went straight through the next green light, and I managed to get into the left turning lane.  As I waited at the red light, I saw him abruptly turn left into the church parking lot where I take the kids to school.  The campus is huge with several buildings.  The preschool is in a building behind the church.  I saw the man tear into the parking lot and head around the building.

I felt so embarrassed.  “Was this a fellow parent I had ticked off?” I wondered…hoped even.  My gut feeling was that he was following me–chasing me.  What would I do?  What would he do?  I don’t know if I did the right thing or not, but I went ahead and parked at the kids’ building and got out with my children.  I figured that at least in this place there would be other people–people I know!

It’s crazy to me that a person can get so bent out of shape because someone pulled out in front of them.  I hate that drivers dehumanize those in other cars.  I doubt most would act the same way if they were looking face to face at someone.  The man drove by as I was getting out with my children.  He was right there.  Why didn’t he do all the damage that he came to do?  He didn’t even yell at me!  My guess is that when he saw that I was just a mom taking my kids to school, his anger probably cooled a great deal.  I obviously wasn’t someone purposefully doing something to ruin his day.  Did he really think it was going to make him feel that much better to put the fear into me for pulling out in front of him?  Ridiculous!

Give other drivers the benefit of the doubt.  Assume that they just made an honest mistake.  It could be a grandma, nervous about driving or a teenager learning how to drive.  Maybe it’s someone who just received bad news.  Hey it could be…me!  Ha ha!  I like to say, you don’t cease to be a Christian because you’re behind the wheel of a car!  Show other drivers the same compassion  you would in other areas of life.  There.  I feel better now!  😉