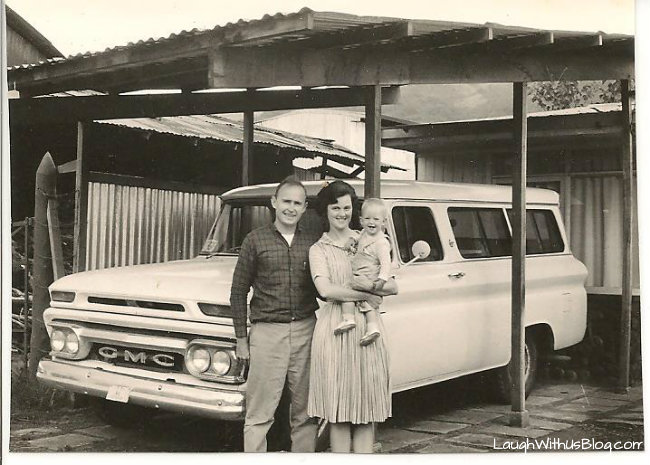 My parents shared their journey of getting to the mission field recently.  If you’ve missed their tale it begins at Missionary Travel Stories.  Today Mom is continuing the story of their Life in Costa Rica Part 2.  You can find Part 1 here.

I don’t remember how long we were in the hospital but it was at least a week.  I didn’t know how to drive then, so I just stayed in Hal’s room with him.  There was a very inexpensive Chinese restaurant next door to the hospital, so that is where I ate.  The menu consisted of rice with beef, rice with pork, rice with chicken, rice with shrimp, and rice with some other more exotic (or strange, at least to me) foods.  Whatever I ordered, I was given a plate rounded up with fried rice with a little bit of whatever else it had mixed in.   On a steady diet of rice, I tried everything, even octopus–my impression was of small squares of inner tube mixed in the usual rice.  I always went back to beef, pork, or chicken.

While we were in the hospital and the nurse was staying with Sara, our trailer was parked in front of the house.  One night someone stole the outside tire off the trailer.  When we got home, we reported the robbery to the police.   Two men came to our house; one was well dressed, but the other looked like a bum and was drinking.  They turned out to be the FBI.  We asked about the bum and was told he was part of the team.  They knew who had taken the tire. The well-dressed man stayed in the house with us, and the other went to the house of the thief.  He posed as a buyer and asked if the man didn’t have a tire of a certain description to sell.  The thief said, no, that he had had one, but he had already sold it.  However, he said, he knew where he could get another one!  The FBI guys asked who he sold the tire to and brought it back to us.

Hal had started studying at the Language School before he got sick.  The most up-to-date method for teaching a language at that time was to send the students home with a tape recorded dialog that they were supposed to memorize.  The theory was that they would learn to pronounce correctly in the same way a baby learns to talk—strictly by ear.  (Years later when I took linguistics courses at Pan American University, that method was no longer favored.)  Some people evidently were able to learn that way, but I suspect others had the same trouble Hal did.  He heard a sentence as if it were one long word and couldn’t tell where one word ended and another began.  He had the advantage of having a wife who spoke Spanish (ahem), and every evening, I would transcribe the lesson so that he could read it and learn it.