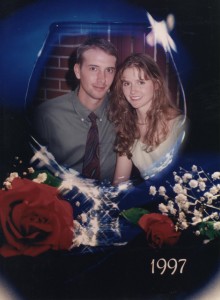 Start at the Beginning: How I Met My Man

My dad always said, “Love is blind and marriage is the eye opener.”  I always liked that saying–until I got married!

We went on my dream honeymoon.  We spent five nights at an all inclusive honeymoon resort in the Pocono Mountains.  The rooms were lavish and unlike any others I have ever seen.  It was wonderful to just relax, enjoy the slow pace, and eat all we could hold.  We had a wonderful time there.

The only inkling of things to come was regarding the food.  You see breakfast and supper were included, but for lunch we were on our own.  Well, Jason figured out how to beat the system.  He ordered breakfast in bed that came to the door at six o’clock in the morning.  I would much rather have slept in.  However they served breakfast in the dining room until 10:30 so we would get there right at the last second for our second breakfast aka lunch!  Little did I know…

After that we were Florida bound to do as many Orlando parks as we could in five days and four nights.  Our first big fight happened at the airport.  We were standing at the super fast paced shuttle.  Jason was holding all the tickets and pushing a cart with our luggage.  He was trying to decide which shuttle we were supposed to take.  Making a very last second decision, he shouted, “This one!” and literally shoved me on.  Tripping over my feet and fighting for balance I looked back and the doors were closing.  Those trains do not stop or wait for people.  He wasn’t going to make it.  This was before we had cell phones.  He had the tickets and all the info for where we were supposed to be.  In that split second I saw myself riding the train alone for hours, not knowing where to get off or what to do.  But by some miracle, he managed to get on.  I still have no idea how he did it, but I was livid!  Jason, bless his heart, did not see that there was any big deal, and was angry with me for being angry.  He had NEVER been angry with me before.  Suffice it to say, I let this spoil the better part of the day.

Find Part 2 of Our Honeymoon here.