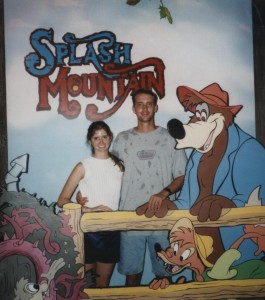 The beginning is located here!

Day two in Orlando was exactly like day one only at a different park.  Up before dawn, stuff down the free breakfast, arrive at the gates when the park opened, grab map, and take off running!  I did wear my better shoes this time, but the damage was already done to my poor feet, and every step hurt.  About the middle of the day I remember Jason saying, “I feel like a turtle,” because I was going so slow.

The weather on this day proved to be particularly hot, and if you know me, you know that I very much enjoy one Coke every day.  The first day I went without, but on this day I was so hot, tired, and hurting that I really, really wanted a cold Coke.  So I asked my new husband if he would please get me one.

He responded, “Are you kidding?  One Coke is five dollars!  Drink water!”  I really couldn’t believe he wouldn’t buy it for me.  It was our honeymoon!  We hadn’t bought anything except the bare minimum for lunch both days.  I didn’t think I was asking for too much!  Finally, a thought occurred to me, so I asked, “I have five dollars in my pocket that was mine before we got married.  Can I spend my five dollars?”  He thought for a minute and finally said, “Well, if that’s how you want to spend your money. . . .”  A few seconds later, with eyes closed, I savored several gulps of my very own five dollar Coke and enjoyed every one!  Then would you believe Jason drank half of it?  The rascal!

The third day we wisely opted for a relaxing day at the hotel instead of trying to do another park.  By the fourth day we both had more realistic expectations of each other, and we enjoyed our last park before the flight home.  I think our love in many ways was blind, but I would change my dad’s saying slightly to say that, in our case anyway, the honeymoon was the eye opener!