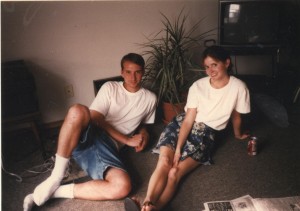 I don’t have a picture of that evening, but this was taken during our early dating days.

Start at the Beginning:  How I Met My Man

We had been dating for just over four months.  I was young and in love!  Not only was it Valentine’s Day, but it was also a Friday, so I could stay out late and relax, not worrying about all the pressures of school and work.  I looked forward to our date all day.

That evening Jason picked me up and took me to the Mexican restaurant that he had taken me to on our first date.  Okay, so I hadn’t liked that restaurant the first time around, and I liked it even less the second, BUT I thought it was romantic, nevertheless!

After the meal he announced, “Well, I thought and thought about what we could do today. . . I couldn’t think of anything.  So we’re going to the mall.”  I thought surely that wasn’t really the whole story.  Maybe he was going to take me there and buy me something.  That sounded like fun.

He drove to the mall and parked.  Before he got out, he handed me a small package.  “Here is your present.”  Well, there went my theory for why we were at the mall.  I opened the package and inside was a little jewelry box.  I gasped when I opened it.  There lay the most beautiful diamond heart pendant and gold chain. I had always admired these!  I loved it!

After lots of oo’s and ah’s and thank you’s, we went into the mall.  We walked for a while, not going into any store or doing anything in particular.  Finally, I realized he actually meant what he said—that he just couldn’t think of anything else.  Right about then we ran into one of my students’ parents.  “It’s Valentine’s Day!  What are you guys doing walking around the mall?”  they asked.  I laughed, thinking, “ I was wondering the same thing.”

I was a little disappointed that this had been the extent of our evening, but I decided I didn’t care.  It was a Friday night, and I was with the man I loved!

As we walked I looked at Jason. He was kind of moving his head funny. “What are you doing?” I asked.

“Just being weird,” he replied.

Oh, I could play that game.  I stopped in the middle of the mall and put my leg and arms in the air Karate Kid style.

“What are YOU doing?” he asked

I thought that was hilarious!  He was right though.  I was with him, and I did feel like a winner!

More from our love story: The Night We Got Engaged.