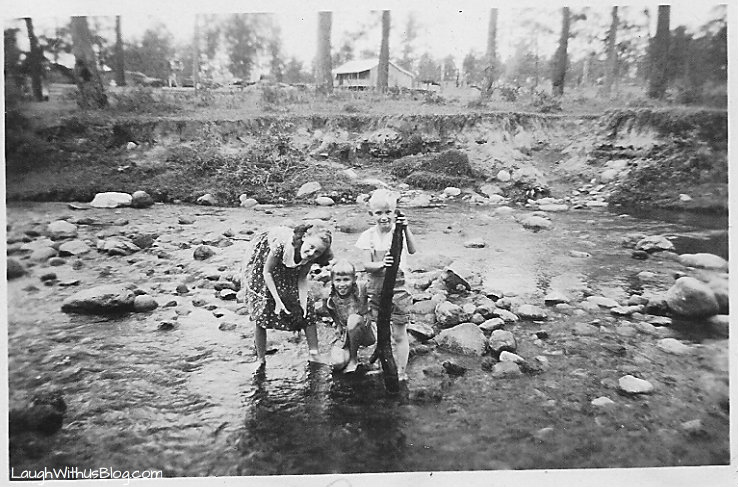 Continuing from yesterday my mom Frieda is sharing her memories of Christmas when she was a child in Dallas and on the mission field in Central America.  Her words below:

For our second Christmas in Honduras, to our surprise there were several presents. The biggest one was a bicycle for all three of us to ride. It had a fresh coat of light blue paint, and we certainly did not mind that it was second hand. Our parents bought the bicycle from a missionary family in another part of the country who were leaving for the States. I’m very sure they did not pay an exorbitant price, but the bicycle was mentioned in a letter to someone in the States. That person wrote back saying that such an expensive present was unseemly for missionaries. We took turns riding the bicycle up and down the block on the unpaved street in front of our house. There were only two or three vehicles in the entire town besides my dad’s mission truck. On the rare occasions that I saw one coming, I would pull over and wait for it to pass before I continued riding.

I think my sister and I each got a small rubber doll, but the most appreciated present I received was a flashlight. It was a small “lady size” which I had never seen before, and the lid that screwed on was red. I thought it was beautiful, but that’s not the main reason I was excited about it. There was no indoor plumbing in that town then, and our outhouse was at the back of the yard. I was always a “scaredy cat,” and was terrified to walk out there in the dark. With my new flashlight, I felt much braver. I still have that flashlight as a precious keepsake, though it doesn’t work any more.

Up until my sophomore year in high school, we were always together as a family for Christmas. My parents were in the States when I was a freshman and part of my sophomore years. But for Christmas of my junior year, we hadn’t seen our parents for a whole year. In susequent years different friends invited me to their homes for the holidays. That year, however, we stayed at school while everyone else got to go home A kind family of complete strangers from a church invited the three of us to Christmas dinner. It was a delicious traditional meal with all the trimmings. Instead of appreciating their kindness as I should have, I felt very sorry for myself. I thought we were objects of charity. I was sure their attitude was, “Let’s do something nice for the poor little missionary kids.” Later in my dorm room, I suddenly realized the meaning of Christmas. Jesus left his Father and all his riches in heaven to come to the earth, to be poor and despised, to die a horrible death on a cross for humanity—for me. What a puny sacrifice I was making so that my parents could take the Christmas message to needy people! This was the part I was privileged to contribute to our missionary family.