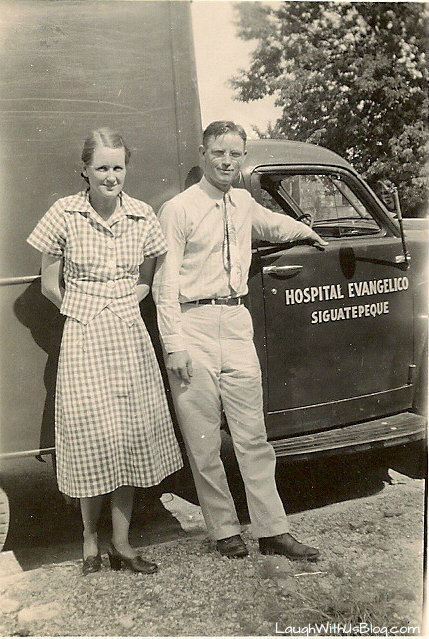 Continuing from yesterday my mom Frieda is sharing her memories of Christmas when she was a child in Dallas and on the mission field in Central America.  You’re in for a treat!  Her words below:

The events of that first Christmas are engraved on my memory. One thing I especially remember was playing the organ for the church, but especially for the Christmas program. In Dallas when I was six we had gotten a second-hand upright piano. My sister and I took lessons for a couple of years, and when we couldn’t afford them, Mother made us practice almost every day, so I learned to play hymns out of the hymn book. When we first got to Honduras, the church organist had been put under discipline. (As I said, the church was having problems. I don’t think the organist had done anything terrible.)

I was immediately drafted to play the organ for the services. The organ was a portable four-octave, pump organ. It folded up to about the size of a large suitcase. The numbers were the very first thing I learned in Spanish so I could find the hymns the song leader announced. We had gotten to Honduras the end of November, and I was asked to play for the Christmas program on Christmas Eve. We had frequent practices all during the month of December.
The program consisted of various groups of children and adults singing “specials,” reciting Scripture or poetry, and performing skits. The recitations were performed very dramatically with abundant motions and expansive bows, and never having seen the like, I had to struggle not to giggle. There was no prepared order of service, and someone would pull the sheets strung on ropes across the front of the church between performances. As a group put on their crepe paper costumes for a skit, the pastor would tell someone to give his or her prepared recitation, or he would hurriedly gather up one of the singing groups which didn’t have members in the skit that was getting ready. It all seemed much disorganized to us, but no one seemed to mind.

Daddy had agreed to sing a hymn with his guitar for the program. However, when it was getting late and they still hadn’t called on him, he thought that in all the confusion they had forgotten his part. He didn’t feel well and six-year-old David was asleep on the bench beside him. He decided to take David and go home. The men and women sat on opposite sides of the church, so there was no way he could let Mother know he was leaving. When they announced don Carlos had a special, he was nowhere to be found, and Mother did not know what had happened to him. They sent a little boy to our house (about a block down the street) to see if he was there. The kid came back and announced to the congregation that don Carlos had already gone to bed. By midnight I was extremely sleepy, and they had only finished about half of the program. The pastor decided to tell everybody to come back Christmas night for the rest of the program, which we did.

No one seemed to be unduly perturbed about Daddy having left early, but my mother thought they were disgraced forever. From our bedroom, we could clearly hear our parents in the next room as the dividing wall didn’t go all the way to the tile roof. Mother was telling Daddy how terribly embarrassed she was, and he thought his actions were completely understandable under the circumstances. My sister and I slept in a double bed. Mother came to sleep with me and sent my little sister to sleep with Daddy. Such a thing had never happened before and I thought it meant that my parents were getting divorced—unthinkable! I lay there worrying, “Here we are new missionaries and they are getting divorced. What will everyone think of us?”

Well, that sleeping arrangement only lasted half an hour or so. Everyone went to sleep, and Mother learned to live with situations such as she suffered that night, as well as her feelings about the Christmas dinner the next day that I told you about. Cooking on a wood stove, outdoor facilities, no electricity, no running water, carrying water to a galvanized tub for baths—none of that fazed her. When people asked her about these “great sacrifices,” she said she was raised with all that in West Texas, and it didn’t bother her.