On my 40th birthday I woke up to find my husband had already left for work.  I got up and grabbed my morning coffee.  Faith came down the stairs and was the first one to wish me a happy birthday.  She announced that she was going to fix me a special breakfast.  She worked in the kitchen for a few minutes and produced a plate of cracker sandwiches spread with Nutella and peanut butter. 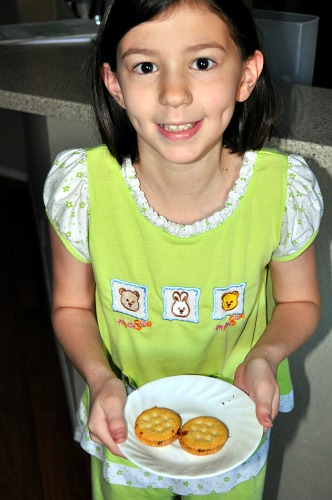 I had thought of many exciting things I could do for my birthday, but in the end I decided that I was tired and had rather just have a relaxing day.  So I loaded the kids up and took them to Krispy Kreme!  We happened to walk in at just the right moment as they were giving everyone free hot donuts and giving the kids hats.

There was a couple with a boy about Little Jason’s age in front of us.  They got their order and sat down.  While I decided what to order, the kids went around the corner to the window to watch the donuts being made.  I tried to keep an eye on them while I paid, but could only partially see them through the window.  I saw the man that had been in front of us walk over to them and take my son’s hat.  I wasn’t surprised that Little Jason gave it to him, but it did kind of shock me when he put the hat on his own head.  That’s kind of gross!  I finished paying and walked over to him.  Good naturedly, I asked the man, “Are you stealing my son’s hat?”

He looked at me kind of funny, “Uh, this is my son’s hat.”  Sure enough, it was his son that was standing over with my girls.  I turned around to find my son still quietly by my side!  Thankfully everyone was very nice, and we had a grand laugh over the whole thing!

Jason offered to take me anywhere I wanted to go for supper.  I chose the Olive Garden, one of my favorite places, but not one we go to very often. 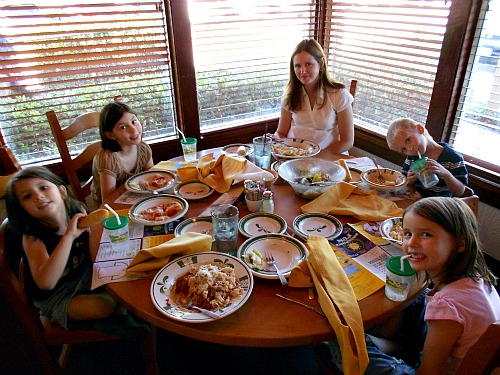 I had purchased a Tiramisu cake the day before, so we came home to eat cake and “open presents.”  Jason had taken the girls shopping the night before.  The funny thing was he took them to his favorite shopping place (not mine) and couldn’t find anything he thought I’d like, so they got me a small package of Butterfinger candy bars!  Though I gave him a hard time, I was perfectly satisfied.  I am so blessed!  Thanks to all of you who wished me a Happy Birthday! 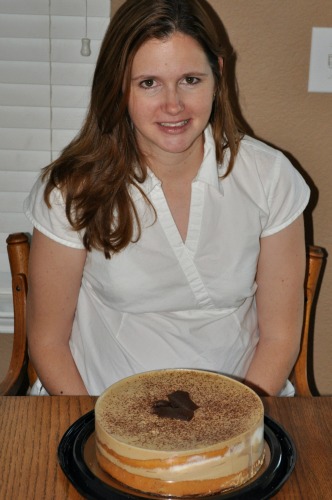