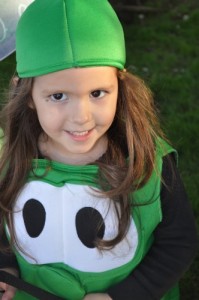 Larry is a Superhero! 🙂 Picture from a previous fall fest.

My sister Miriam called and asked if I would be interested in taking the kids to the Super Hero festival.  Sure, I was game.  Jason had taken Faith on an overnight camping trip with her AWANA group ,and I was looking for something fun to entertain the others.

I was kicking myself the whole way for forgetting the camera.  But when we got there– you know, to the festival–suddenly it wasn’t such a big deal that I had forgotten my camera.  We looked out over the parking lot which had a few scattered booths all charging $1 per game.  “Haaaaa!”  We burst out laughing.  Had we really driven all the way over there for that?  The joke was certainly on us, but we didn’t see the Joker anywhere.  Spiderman and two lady superheroes did show up, though, to make the kids smile.  The kids jumped in the bouncy house for a whole thirty seconds, spilled the free purple snow cones all over and were ready to go.

“Hey, I think there is a Godfather’s pizza place over here somewhere.”  I had been craving their pizza and desert buffet that I got hooked on in Nebraska.  My sister looked it up on her phone.  It was just a couple of miles down the road!  At least the whole trip wouldn’t be for nothing.  We drove around a little until finally my sister shouted, “There it is on the left.  Turn now.”  I obeyed her instructions, turning right smack into a gas station.  Sure enough, they sold Godfather’s pizza…in the gas station!  We burst out laughing again.  Sometimes the best plans and intentions just don’t pan out.

What were two moms with four disappointed kids to do?  Why, take them to Chuck E. Cheese of course, and that’s what we did!