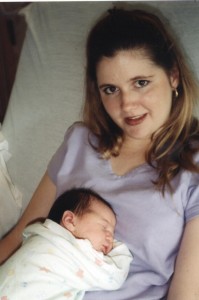 Events following the birth of our first daughter were indeed dramatic.  One week after she was born, I hemorrhaged and had to be hospitalized.  The week after that we once again landed in the hospital.

Our precious little girl decided one day to quit eating.  I was nursing and tried everything I could think of to get her to eat.  She’d been nursing just fine before that.  I wasn’t alarmed at first.  I just figured that when she got hungry enough she would begin to nurse again.

After about a day and a half she was visibly thinner, and when I took her temperature, I realized she was running a fever.  We loaded her up and headed to the emergency room…again.  It was so hard to watch those doctors poke and prod on my little two-week old baby.  They didn’t have any answers for me, but at the hospital they finally got her to drink some formula.

I was devastated.  Somehow at that point my perception of success as a mother hinged on nursing my child, and I had just failed.  It sounds silly, doesn’t it?  The doctors decided to keep her overnight for observation, so for the third weekend in a row we were sleeping at the hospital.

They assigned a lactation nurse to me.  Nobody could figure out why my baby quit nursing.  I was at the end of my rope emotionally.

Finally, a nurse came to talk to me.  She told me that although nursing is the best thing for my baby, she would be just fine on formula.  She said that she didn’t nurse her first child–at all, and that she was a very healthy sixteen year old.  As crazy as it sounds, that was exactly what I needed to hear.  If I failed at nursing my baby would be okay.

She finally started nursing again later that day.  We were so thankful because three weekends in the hospital were enough! I think that her refusal to eat was a direct result of what I had been through the week before with the blood loss and pain meds.  I did go on to nurse her for an entire year.