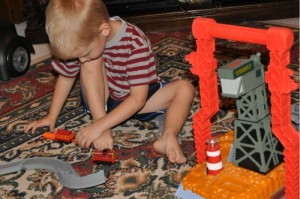 On the way to San Antonio we stopped at a Mardel Christian Bookstore.  It is my husband’s favorite place to shop, and before every trip he looks up all the Mardels on the way!  This one happened to be right off the highway.  We let the kids play in the children’s area while Jason and I looked around.  This particular store had a Thomas the Tank Engine train table set up in the middle of the children’s area.  My Little Jason was SO excited.  He loved those trains.  The problem came when it was time to go.  He pitched a fit like we’d never seen before and kept crying, “My trains!”  It was so bad that we decided to go ahead and eat, thinking that would pacify him.  We were wrong.  He didn’t get happy again until we were ready to leave the restaurant and get back on the road.

My sister Sara had told me ahead of time that she was going to pack up some of her son’s Thomas trains that he had outgrown and give them to us in San Antonio.  “Well, I don’t have to guess if he’s going to like them!” I thought.  We didn’t show them to Little Jason until we returned from our trip.  He saw us bringing them in when we unloaded the van and got really excited, so I took out a few of the trains and gave them to him.  Oh, how he played with those trains!  At 11:00 that night he was still awake in his room playing happily with his trains.  Hours later, he woke up screaming.  I went in his room, and he was shouting, “My trains!”  Apparently, he woke up and couldn’t find one of them.  I showed him that they were all there, and he went right back to sleep.