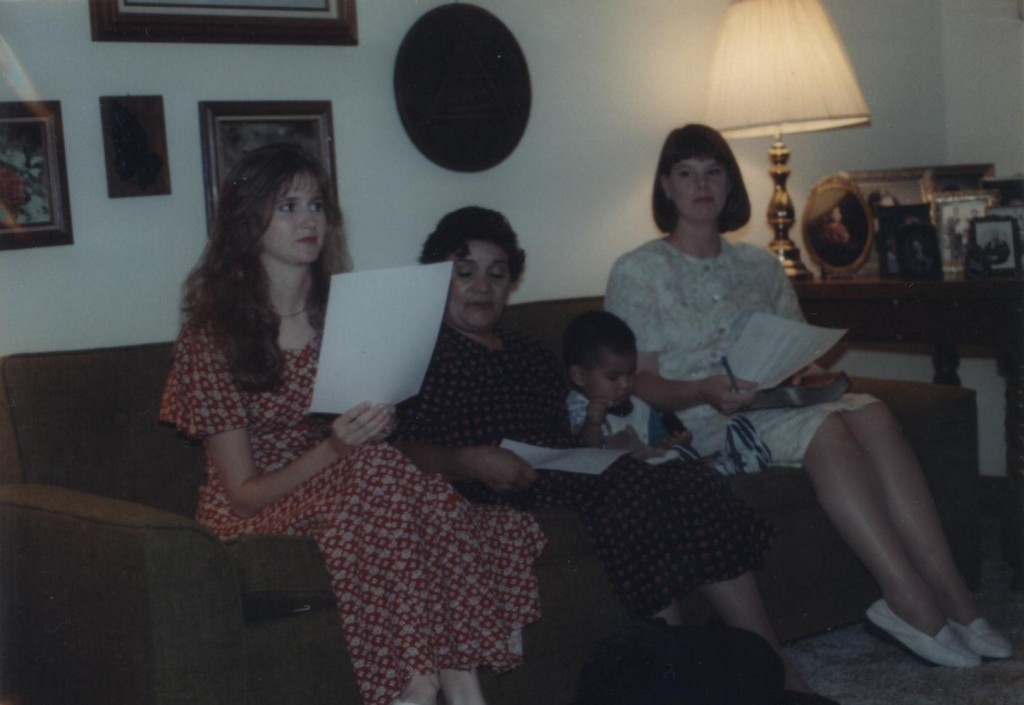 I remember the day it arrived on a big truck.  My missionary parents had  just moved to South Texas, and a very kind family had sent them a truck load of much needed furniture.  We were particularly excited about the  avocado green couch.  It was a hide-a-bed!

There were six in my  family and our house had four bedrooms.  I was always the odd one out.   We also had lots of people staying with us and even living with us at  times.  So inevitably I would be moved to the couch to sleep, although I  never used the hide-a-bed feature.  Pretty soon I found that I  preferred my couch to doubling with one of my sisters.  The couch was my own.

One day when I was a teenager my sister and I were  playing a card game in front of my couch.  The game was very intense and we were very competitive, so I didn’t notice her sudden absence.   Finally, I looked up and she was standing on the couch pointing and  making unintelligible noises.  “What are you doing?”  I laughed at her.   She continued to point and grunt.  Finally I saw it.  There was a  multi-colored snake squirming over our cards!  In no time flat, I too  was on the couch.  “Why didn’t you tell me?” I demanded indignantly.

“I was trying to,” she finally said.

Well, the snake disappeared, and we didn’t really think about it much except to recall the incident and laugh.

Fast forward about twenty years.  All of us siblings, now married, came back to celebrate Christmas  together one last time before my parents sold the old house.  I was  particularly planning my goodbye to my beloved green couch.  The way the sleeping arrangements turned out, my brother and his wife ended up in the living room and decided to pull open the little-used hide-a-bed of my green couch.  I heard their gasps from the next room.

“Come here.  Ya’ll have got to see this!” my brother called.

There under the hide-a-bed was the biggest, longest snake skin I have ever seen!  Eww!  All those years they told me there were no monsters under  the bed.  That was only partially true.  There were snakes!!!  ﻿