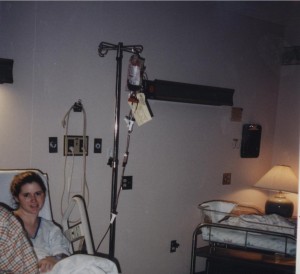 Exactly a week after I had given birth to Faith, my first baby, my mother-in-law came to help me.  I am convinced now that Kathy was sent from God.  Pretty soon after she arrived, I noticed that I was bleeding heavier, and I remember asking her about it.  I called my sister and my mom and asked them if it was normal to still be bleeding so heavily a week after the baby was born.  Having no idea how much I was bleeding, they all said it wasn’t unusual.  I tried to take it easy after Kathy got there, but I was becoming increasingly weak and concerned about the bleeding.  My husband went out to mow the lawn, and as I walked across the house, things began to go black.  I thought that might be a pretty good sign that I should call the doctor!  I recounted my symptoms to the doctor on call, and I distinctly remember his answer: “No, this is NOT normal.  Get to the emergency room now or dial 911.”  I was hemorrhaging.  What is worse is that I had been hemorrhaging for six hours.  As Kathy went out to get my husband, I remember being more worried about leaving my baby than anything else!

When Jason heard what the doctor had said, he immediately picked me up and put me in the back seat of his car.  He said he could get me there faster than if we waited for the ambulance.  I had never seen so much fear on my husband’s face–he thought I was going to die.  He kept looking at me in the back seat to make sure I was still breathing, and I kept telling him that if he had a wreck he’d lose me for sure!  They were expecting me when we got to the hospital.  I was wheeled right in without having to wait around to fill out paper work.  A doctor saw me immediately.  I heard the doctors talking right outside my door, and a nurse said, “Something has got to be done about this one.”   My husband was sobbing when the doctor told us that he thought I was hemorrhaging from retained placenta and that they were going to take me into surgery to try to stop the bleeding.

I remember the whole surgery.  I begged them not to put me under because if they had, I wouldn’t have been able to nurse my baby.  I remember the faces of the doctors and nurses, and I remember trying to talk and joke with them.  When the surgery was over, they told me they had stopped the bleeding and that I was out of immediate danger, but that I had lost a lot of blood.

When I was finally transferred to a room, Kathy brought little Faith and took care of her for me through the night so that I could nurse her.  She really had her work cut out for her.  Faith screamed most of the night.  Kathy walked the halls with her, dodging complaints from angry patients.

All that night I writhed in pain in the hospital bed.  I had had third degree tears when my baby was born the week before, and with the surgery, the stitches had all ripped open and had to be re-stitched.  The nurses wouldn’t give me any medicine for the pain because they couldn’t reach my doctor to okay it!  Early the next morning my doctor came and was furious that no one had given me anything.

My pastor, a very happy and jolly kind of man, came to visit me.    When he saw me, he stopped short and kind of gasped.  “I must look really bad,” I thought to myself.  I had no idea!

Later that day the nurse got me up for the first time so that I could take a bath.  That’s when I saw myself.  My reaction mirrored that of my pastor.  I had no color unless you count gray.  I looked like death.

The nurse ran the bath water in the Jacuzzi tub.  She told me she was going to make it nice and warm so that I could relax–no matter that she was making it hotter than she was supposed to.  A hot bath did indeed sound wonderful.  She helped me into the tub, turned on the jets, and left the room.  The next thing I knew three nurses were lifting me out of the water.  I had fainted.  I fainted two more times on the way back to my hospital bed.

There was a lot of activity in my room then, and I remember I was losing my vision.  It was the strangest thing: I would look at the nurse, and her face looked like a puzzle with some of the pieces missing.  The doctor said this was because I had lost too much blood and ordered a transfusion.  I think they gave me three units.  The life was literally pumped into me, and within a couple of hours the color returned to my face.  I thought it was incredible!  I recovered quickly after that and was released to go home the next day.  I was so happy to once again be home with my husband and new baby, and I thanked the Lord for another chance to be able to live for Him!

This event, among other things, led me to  begin writing and later to enjoy it.  I wanted my kids, should anything happen to me, to have something to remember me by.

Click here to read about this experience from my mom’s perspective.