My menu for Cinco de Mayo changes every year.  In 2006 I tried this Tres Leches Cake recipe and my family will  not let me make anything different for dessert.  I actually grew up in and near Mexico and didn’t taste Tres Leches until on a missions trip to Guatemala!  But it is made and well known in Mexico so I suppose it is okay that I make it for Cinco de Mayo!

Beat 3/4 cup of the sugar and the egg yolks until light and fluffy, about 5 minutes. Fold in the milk, vanilla, flour, and baking powder.

Beat the egg whites to soft peaks, adding the cream of tartar after 20 seconds.  Gradually add the remaining 1/4 cup sugar and continue beating until the whites are glossy and firm, but not dry.  Gently fold the whites into the yolk mixture.  Pour this batter into the buttered baking dish.

Bake the cake until it feels firm and  an inserted toothpick comes out clean, 40-50 minutes.  Let the cake cool completely on a wire rack.  (The directions say to unmold the cake onto a deep platter.  I did this the first time I made it but after that I have just left it in the baking dish.  I find it much easier.)  Pierce the cake all over with a fork.

Prepare the milk syrup:  Combine the evaporated milk, sweetened condensed milk, cream, vanilla, and rum in a mixing bowl.  Whisk until well mixed.  Pour the syrup over the cake.

Prepare the meringue: Place 3/4 cup plus 2 tablespoons of the sugar in a heavy saucepan with 1/4 cup water.  Cover and cook over hight heat, for 2 minutes.  Uncover the pan and cook the sugar to the soft ball stage, 239 degrees F on a candy thermometer, 6-8 minutes.

Using a wet spatula, spread the top and sides of the cake with a thick layer of the meringue.  Refrigerate the cake for at least  2 hours before serving. 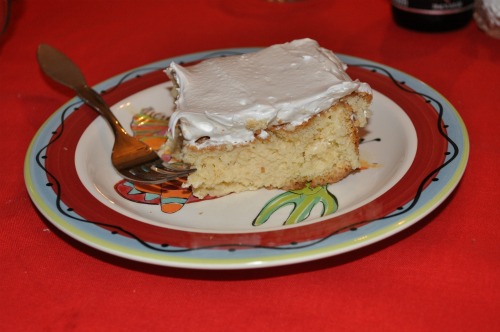 This recipe is by Steven Raichlen in his book Miami Spice.  It is published with permission!