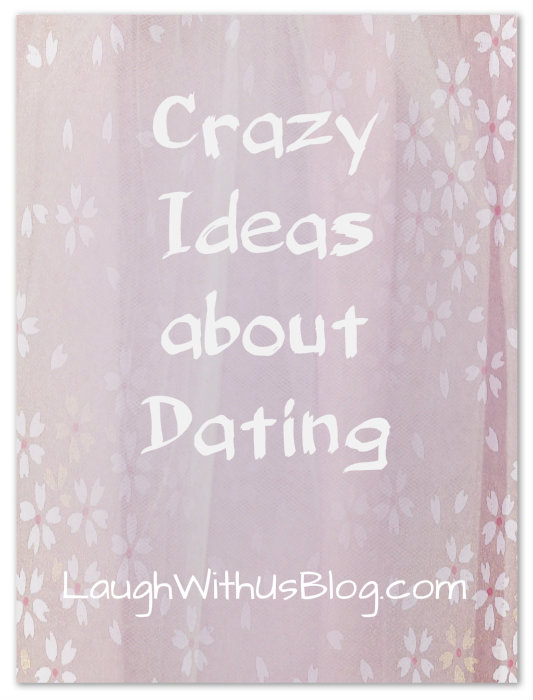 The last couple of years I have thought a lot about dating.  My children are still young, but it is in preparation for what we would have them do and why that I have pondered these issues.  I have never been in the Courtship camp.  Why would have to be another post.  But I certainly don’t agree with the the world’s idea of dating either.  In a lengthy discussion with friends one day someone finally said to me, “Ohhh you believe in dating for the purpose of marriage!”  Yes!  That’s exactly it, but don’t all Christians?  Uh, no.  And that was the shocker, for me at least.

In any case I have gotten a kick out of thinking back to my ideas of dating from my college and single days.  Go ahead.   Laugh!  🙂

1. Only go on a date with a Christian.  Now I suppose that’s good for a general rule.  Though I think I gave guys the benefit of the doubt that went to church regularly or were in Bible college.  News flash, not all church members or Bible college goers in fact know the Lord, sad but true.  I don’t think a little more look into a guy’s character would hurt even before a first date.

2. Always accept a Christian for a first date unless I had a very good reason not to.  I think the underlying purpose of this was not to base interest in someone on looks, which I would say is good.  However, I went out with a lot of weirdos because they A. claimed to be a Christian and B. asked me out.  So unless I was already spoken for or there was something about them that really creeped me out I said, “Yes.”  I felt like I SHOULD say yes, like it would be wrong not to go.

3. Never, ever chase a guy.  I was legalistic about this one.  It’s really a wonder I ever got married.  If I ever had the slightest interest in a guy, I would literally walk the other way when I saw him coming.  I actually changed my class schedule one time, because a guy was in my class that I found attractive.  Ha ha ha!  How crazy is that!  I had the idea that all initiative should come from the guy, but I was a little extreme…maybe?  I had this image in my head that I NEVER wanted to wake up one day and have my husband tell me he was stuck with me because I chased him.

How I laugh now!  I guess it isn’t any wonder that my husband, and I were set up.  Maybe my rule #2 actually worked in our favor because he was so much younger than I was, and he didn’t say much when we met so I didn’t think I’d be interested.  But after the first date, I definitely wanted to see him again.  I’m so thankful for the Lord’s grace in our lives!  I’m sure I haven’t lived out my last crazy idea yet.