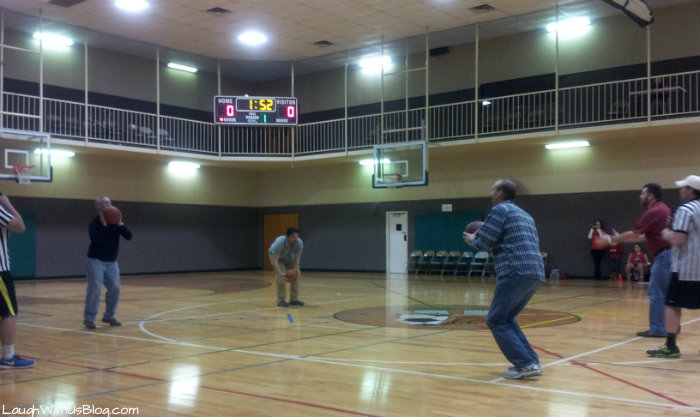 My husband Jason is a quiet, kind, soft spoken man.  People think they have him pegged, but I always say no one knows my husband until they have played a game with him.  It doesn’t matter what game really.  He plays to win and he will defeat his foe, or die trying.

The three of our girls are playing basketball right now with Upward.  During half time the coordinator usually speaks for about five minutes.  On this day he had an object lesson and wanted volunteers.  Jason jumped up right away and went forward.  While he is quiet, he is definitely not shy.  The object lesson was about team work and the volunteers were to hit their partner’s ball in the air and then catch it.  The team that did it the most times won.  Jason misunderstood the instructions and thought he won, but didn’t.

The next day we had another game and the man used the same illustration and asked for volunteers at half time.  Jason jumped up and ran forward.  I hid behind the kids.  Surely Jason will be recognized by someone as having done it the day before!  Once again he gave it his all, but didn’t win.  Now he was significantly frustrated.

Would you believe that at  our third daughter’s game he went up there again?  All three times!  He didn’t strike out though.  Woo hoo!  When he went up a lady in the stands asked, “Didn’t he do this in last night’s game?”  Ha ha.  Yep, that’s my man!

As we were sitting in the bleachers watching our last daughter’s game, Jason was coaching Faith who was sitting beside him.  He was telling her that she needed to use her hips to push back when someone is pushing her.  While she is very aggressive on defense, she has not been so aggressive when she has the ball so Jason was trying to help her out.  Sitting there in the bleachers he decided to demonstrate.  “You need to use you hips like this…”  And my daughter landed on the floor!  Ha ha!  I think he made his point.