I want to thank everyone for the birthday wishes.  I really did have a great day.  Now with four children I have come to understand that they are not going to become selfless little angels just because it is the anniversary of…well…anything!

I have recently gotten in touch with a couple that I went to high school with.  I was so proud of remembering that the man and I shared the same birthday.  So one of the first things I did in the morning was post on his wife’s Facebook wall to ask her if she would make sure and tell her husband “happy birthday” for me.  Only I received a prompt reply from her stating that she’d be happy to relay my message, but, uh, his birthday was in July . . . .   I have such a great memory!

I dropped off my oldest two children at a one-day-a-week school for homeschoolers that they attend so I was able to do some things just with my youngest two.  First, I pampered myself with a wonderful breakfast from… McDonalds!  Then we went shopping, and I was so excited to find a Coke shirt.  I had been wanting one for a very long time.

Then we set off to get groceries.  On route I answered the phone–no big deal.  When the call ended I just put the phone on the seat under my leg.  I had totally forgotten about it when a few minutes later I heard this clicking coming from under me.  I think I jumped clear off the seat, seat belt and all!  I had somehow pushed the button that takes pictures.  I might have had a wreck!  Whew, that was a close one!

Upon returning home I brought the groceries in and was so eager to see if I had gotten any comments on my blog that I left the frozen fish sitting on the counter . . . ewww!

While the kids played together I worked on my blog a little.  Still being new in the blogging business, I was happy to finally find the Google Connect button that everyone was asking me about and added it to the blog.  I am becoming so techy these days!  Then I accidentally followed myself!  Not a big deal except I’m only my fourth follower.  Cheeks turning quite red!

Later on, the kids all “wrapped” some of their own things and brought them to me.  They kept telling me that I could keep them.  It was so sweet.  My four-year-old kept saying, “It’s because I don’t like it anymore.”  After every one she gave me!  It’s the thought that counts . . .right?

Jason wanted to take me out to dinner, but I couldn’t think of a place that would be special for me yet also fun for the kids, because I’m here to tell ya, “If it ain’t fun for the kids, it certainly ain’t gonna be anything special for me!”  So I posted a note for ideas on Facebook and got lots of great suggestions that I hadn’t thought of.  We settled on a Japanese Habachi grill.  Jason and I had been before and knew the kids would be very entertained watching the chef do all his tricks right in front of them as he prepared the food.   We even found a coupon for 25% off the ticket, and they still gave me the free birthday desert.  What a deal! 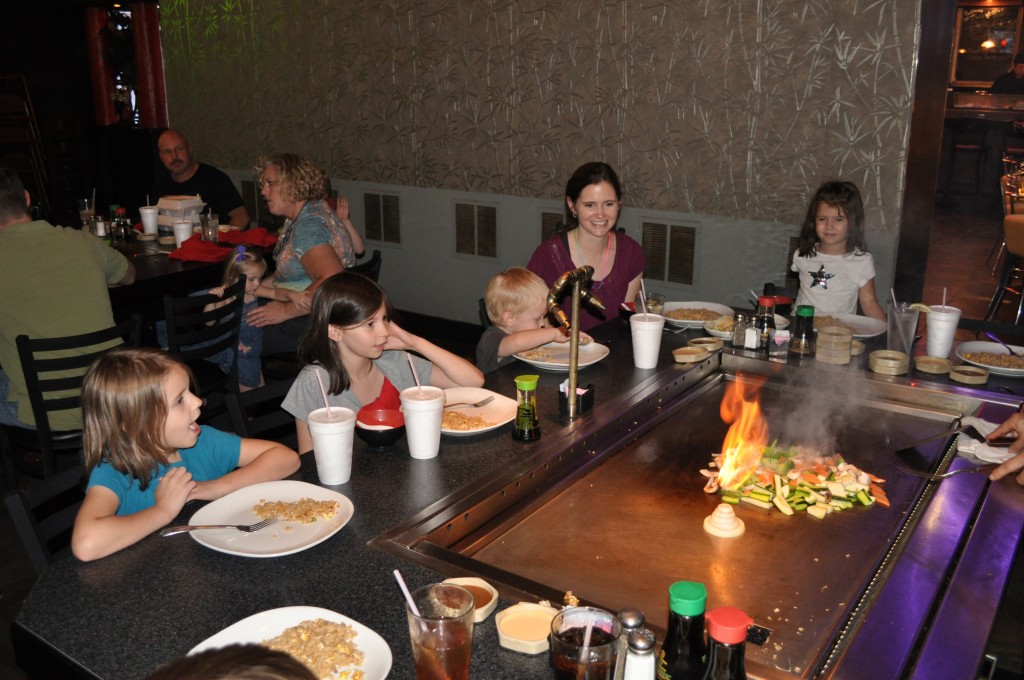 I did no laundry, no cleaning, no dishes all day!  A real homemaker would probably not have indulged so much!  So yes, it was a great day.  I am truly blessed!