I don’t know what’s wrong with me, but I really am not keeping things together very well.  I don’t know if I’m busier than usual or if I’m just plain losing it, but wow I am THAT mom!

The girls had a culture day at school (the one day a week program for homeschoolers that they attend) that they were so excited about.  They dressed up, took some food for a special lunch, and…each made crafts to barter and trade with other classmates.  You know me and crafts, maybe that was my problem!  But I had gone to the store and purchased items that they could easily make.

Whatever the problem was, we all woke up in a funk.  I had an orthodontist appointment so I was getting ready for that.  Little Jason couldn’t find his shoes.  Faith couldn’t find her tank top.  I had just put it in the washing machine and turned it on—oops!  Grace couldn’t find anything to eat.  Joy was mad that she was the only one ready.  I was mad that she was the only one ready and wasn’t helping everyone else. Ha.  When I thought we were finally ready to head out the door, Bobby dirtied his diaper.  We were so late, much later than we had ever been, and I had to get to my appointment for crying out loud.  I rushed the boys out the door and knocked one of them down on the way to the van.  We buckled everyone in and rushed to school.

As we streamed out of the van when we got there, Grace couldn’t find her backpack.  Then came tears.  She had left it behind the van.  I had run over it!  Crazy.  I left the kids at school, then drove home to see if the backpack needed CPR.  Amazingly, it just had a couple bumps and bruises, but would live!

That afternoon I picked up the boys from preschool.  Then when I went to pick up the girls, lo and behold they were performing.  I didn’t realize it until… 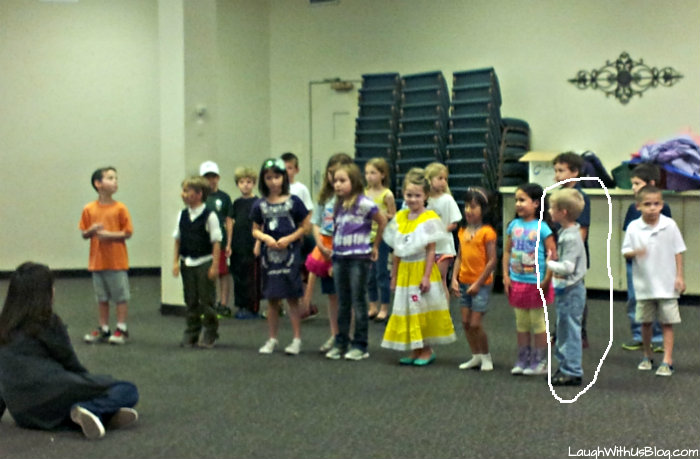 Joy came running up to me.  “Mom, you’ve got to get Little Jason.  He’s in the performance!”

I stood there stupidly, “Performance?”  Sure enough Grace’s class was singing and there was my little guy joining in.  Well, he actually looked like he belonged and was trying to do the motions and everything.  I figured it would be more distracting to run up there and haul him off.  I had no idea there was to be a performance.  See, I told you.  I’m losing it.

How was your day?