We heard the front door opening and ran down stairs. Jason was home so it was time for my oldest daughter and me to finally take off on our Mommy and me day. We got there as the door opened and I groaned. “It’s raining!” Now I’m thankful for rain, mind you, but I really don’t like to drive in it. We managed to get loaded up and headed out, both of us smiling ear to ear.

We drove straight to the movie theater where we ate supper and watched Despicable Me in 3D. I enjoyed the cartoon, but the 3D is really cool. On the roller coaster ride I actually grabbed my daughter and screamed all the way down. 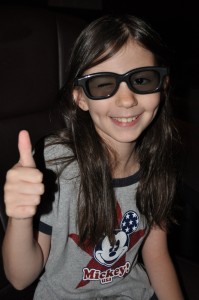 When the movie was over, it was just 8:30. It wasn’t quite dark, and the rain had stopped, so we headed to Barnes and Noble. I’m telling you, I no sooner got on the highway than it started raining again. A minute later it was pitch black, thundering, lightening and pouring so hard I couldn’t see. Of course it didn’t help that I was driving Jason’s car, and I didn’t know how to keep the wind shield wipers on. All I had found was a lever that would keep them on if I held it up. So I was driving blind, one handed, and I thought we were going to die.

“Pray for us!” I shouted over the noise.

“I already did–a lot of times!” she yelled back.

I couldn’t believe I was laughing! I finally managed to see the road enough to get off on an exit, but I was so blind I ended up following the road right back onto the highway. Traffic was going about 35 mph and I was going about 25–not a good scenario. How could all those other people see? Finally I managed to get the car off the road and under a gas station cover where we waited until the rain died down. We huffed and puffed and thanked God that we were ok.

We made it to Barnes and Noble where my daughter picked out her free books from the summer reading program. By the time we came out of the store, it had quit raining–until we got on the highway, that is–but by this time I had found the windshield wipers it wasn’t so bad, or maybe I was just an old pro by then. I’m not sure which!

My next problem was finding the hotel. It simply was not where it was supposed to be. I shall trust Google maps no more. The hotel was actually on the other side of the highway and about a mile from where it was supposed to be, and uh okay, I’ll confess…a whole two miles from my house! I’m adventurous. Really I am. I uh just didn’t want to waste our time driving. Yeah, that’s it!

The hotel was perfect. They even had a children’s promotion going and gave my daughter a bracelet, coloring book, and colors. We roamed the halls, got in our favorite pjs, then talked and read books until midnight. 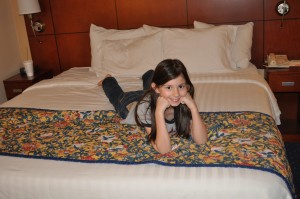 The next morning we ate at the buffet, where my sweet girl gorged on all the pastries and I got my very own Texas shaped waffle. Woo hoo! Then we headed to the Mardel Christian book store. We had broken open my daughter’s piggy bank, and Mardel is where she wanted to spend her money. She spent an hour picking out the perfect stuffed animals. She was then disappointed that she didn’t have enough money left over for silly bands, but she didn’t let it rob her joy. 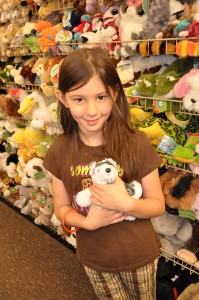 Next was Borders for more free books. Then we got her hair cut. She just loved her new look. After I paid for the hair cut, the lady reached in her drawer and handed my girl none other than a bag of silly bands. I couldn’t believe it! 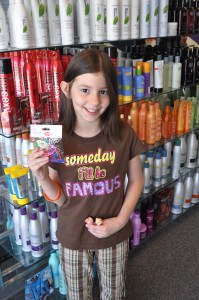 We had a little bit of time to spare, so we went to McDonald’s for a drink.  My daughter’s cup had a coupon for a free smoothie! It felt like everywhere we went there was a bonus.

We made it to one more movie. Beezus and Ramona was my favorite movie of the year. I love the Ramona books and didn’t figure the movie could come even close to being as good as the books, but I loved it. “I laughed. I cried. It moved me, Bob.” I liked every detail about the movie except the mother’s eyebrows. Now they really bugged me. I think that’s why I don’t pluck my eyebrows–for fear they’ll turn out like that! 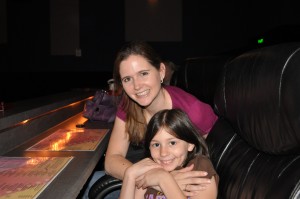 We ended our time together with our free smoothie at McDonald’s. Yep, books, movies and food were the activities my sweet girl chose and that was perfectly fine with me. We had a wonderful time! She talked to me more in one day that she has all year. I would highly recommend a Mommy and me day!