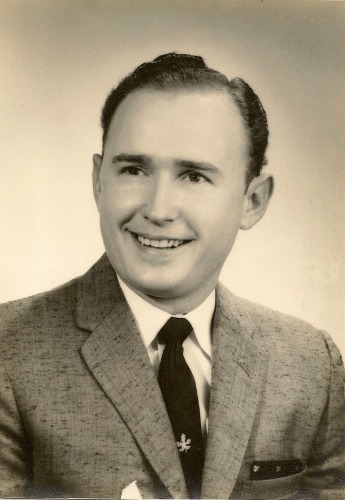 My dad Hal Thompson is sharing some of his childhood stories with us.  Dad is a missionary and pastor.  You can find his ministry blogs at Teaching Truth Today or Enseñando las Escrituras.  I have always loved listening to my Dad tell stories from his childhood and am thrilled to share them with you.  His words below:

In our house each of the three meals of the day was considered a main meal. Breakfast was at 6:00, dinner at 12 noon, and supper from 6:00 to 8:00 in the evening. The times varied some during the three seasons of the year. Our dining room table was probably ten feet long by four feet wide (a regular ranch dining table). I am the 9th child of 12, and my father usually had from one to three men working for him on the ranch, so you can imagine the group around the table. Each time Dad had a new worker, I remember him giving instructions. He would mention the hours at which meals were served. Then he would say, “My wife is not running a restaurant, so if you want to eat, you must be here on time.” Meal time was a big deal for us children. The first 30 to 40 minutes was spent eating, and the last 20 minutes in visiting and, in the summer, drinking an extra glass of iced tea. The dinnerware was white china. I had never seen any kind of plastic dishes until I was 20 years old. The utensils were silver plated—no stainless steel back then. It was my job to wash and dry the silverware until I was about seven years old. I was so happy when I graduated to being allowed to wash and dry the plates. (I still hate washing silverware.) Each person had duties, so the dishes were cleaned up in a hurry, and then someone mopped the kitchen.

I remember when we butchered and salted eight hogs at a time. When we killed a beef, Mother would can the meat.  She kept 500 laying hens, and during the war she furnished eggs to the man who owned the hatchery.  We had lots of angel food cakes and merengue pies.  Since we milked cows, we also often had desserts with whipped cream.  Mother whipped the egg whites and cream by hand. (My brothers and I would not eat merengue or whipped cream because it looked to us like calf slobbers.) We thought pork was for breakfast only, and we had bacon, sausage, ham, or pork chops for breakfast every day.  I always thought of that big platter piled high with bacon when, after the war, we would have only two or three slices on our plate.  One time we canned a whole wagon load of corn.  My brother and I had to shuck corn all morning without any breaks.

The rules at the dinner table were that once my dad gave the invitation, you picked up the food nearest you, served yourself, and passed it to the left.  We never reached across the table.  You always called the name of person who was close to the food that you wanted seconds and asked them to pass it.  No one got up from the table unless he was properly excused.  My mother, bless her heart, never sat at the table as she was too busy serving.  We always had dessert at dinner and supper.  We had home-made bread which she baked daily.  We did not have a refrigerator. We did not get electricity until the last two years I was on the ranch, but even then, we didn’t buy a refrigerator for many years.  Why get one when we never used one before, and there were never any left overs?  Dad put in a butane gas cooking stove for Mother, one of the first in that part of Oklahoma.  I’ll never forget he buried the butane tank about two hundred yards from the house.  It was something new and people thought it might blow up.  Before we got the butane stove, Mother had a three-burner kerosene cook stove with a removable oven that sat on two of the burners.

I was only late for dinner one time that I can remember. (And I’m pretty sure I can remember.) It happened when I was probably about seven or eight years old.  I was somewhere on the ranch by myself that day doing something, and there was an unavoidable delay—I don’t remember just what happened, but I would never be late on purpose.  I got to the house about 1:00 feeling starved.  Everyone had left the dinner table, and Mother and my younger brothers were clearing it.  That morning we had killed six friers to have for dinner, as was common during the spring and summer seasons, so I knew we were having country fried chicken.  When I arrived everything had been eaten, as usual.  There was some home-made bread left, but that was all.  I saw a plate left by someone who had not really cleaned the chicken bones, so I quickly finished what they left.  I heard my mother say kind of to herself, “Oh, my, I should have saved some food for Hal.”  She was so busy feeding so many people that she probably didn’t realize I wasn’t at the table.