It was day two of the THSC Convention and Family Conference.  After a full day of sessions, we were excited to see John R Erickson, the author of the Hank the Cow Dog books, in concert. 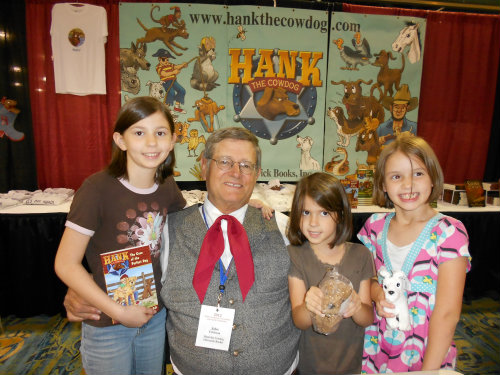 We had gone out to eat and thought we left plenty of time to get back to the concert, but didn’t plan on being stuck in traffic due to a nearby KISS concert.  We were growing more and more nervous about getting there on time.  Friends of ours called and said they were saving us seats in the front, but we didn’t want to leave them there saving seats for our whole family for long.

When we finally neared the hotel, but were far from a parking spot, my husband suddenly stopped in the middle of the road holding up all that traffic and yelled, “Get out now and go in.  Take a couple of the kids with you!”  Well, there are times to make appeals to his commands and there are times, for better or worse, to just do what he says.  I took one look at his face and jumped out of the van and frantically opened the side door for some of my kids to get out.

My older girls, being used to the normal routine, and not being even mildly aware that we were in the middle of the road holding up traffic began slowly unbuckling all the little kids’ seat belts.  I stood there yelling wildly thinking for sure one or all of us were going to get hit by a car, until my oldest two finally climbed out.  I grabbed them both by the hands and prayed that the Lord would honor my obedience to my husband by letting us all live.  We got to our front row saved spots huffing and puffing.  I didn’t stop praying until I saw my husband bringing the rest of the kids safe and sound, but I couldn’t stop laughing at the spectical we must have been!

Faith especially loved the concert.  I used Hank the Cow Dog books to move her from easy readers into chapter books when she was younger.  She has always loved animal adventures so I got a Hank book on CD and had her read along with the book.  Doing this brought books to life for her.  She has read and listened to so many of them that hearing John Erickson speak and sing was like meeting her good friend Hank the Cow Dog since John does all the voices and sings the songs on the CDs!

As we were enjoying the concert my little ones began getting restless and saying they needed to go to the bathroom.  Jason got up and took them out.  A little while later a lady came with her daughter and sat in our empty seats.  “My husband is sitting here.  He’ll be right back,” I whispered to the lady.  Instead of leaving she picked her daughter up and placed her in her lap.  “My husband took my two kids to the bathroom.  These seats are taken,” I insisted.  Finally, she got up and went back to her seats that were a few rows back.  I placed my diaper bag across the seats so that wouldn’t happen again.  I felt bad telling the lady to leave.  I wished my husband would hurry back.  Meanwhile, I laughed and sang with Hank.  I fed my baby.  Still those empty seats remained.  I felt that lady’s stares in my back like lasers.  Where in the world was my husband and kids?  Oh he figured he wouldn’t make the kids sit still any longer and let them run around in the back!  I was mortified, but what could I do?

The next day we all went into the book fair.  The girls each picked out a Hank memento.  John Erickson signed Faith’s book and happily posed for a picture.  What fun it was to meet Hank the Cow Dog!