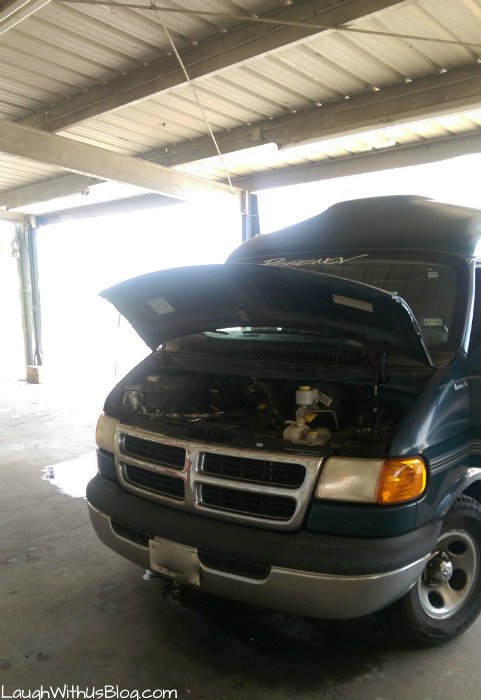 It was an extremely busy day. We had appointments upon appointments.  In the afternoon Jason and I made a mad dash to look at some used vans.  Our 2003 van is getting so old now and things are beginning to go wrong a lot.  We were strongly considering getting something else.  We didn’t have much time to look because we had a guy coming to look at our roof.  With all the heavy rains in Texas we found a place where water was trickling in during a down pour.  Great!

We made it back home just in time to scarf down some take out and greet the roofing guy at the door.  He looked around, found a small problem, and said it would cost an exorbitant amount.  Hmm maybe it was still under warranty we thought, and told the guy we’d consider it.

No more had he left than we got in the car with our second daughter Joy and left our oldest babysitting the three younger kids so that we could look at the new Ford Transit vans.  Even though she is of age, we don’t like to leaver Faith with the kids very often or for very long, but she is under strict orders to never, ever open the door unless I know who is coming and why.

While we were away and unbeknownst to us the roofing guy returned and rang the door bell.  My daughter did not go to the door.  He rang it over and over, she said and then he pounded on the door, but finally he left.

We didn’t have any luck finding a Ford Transit Wagon.  It seems the only ones around are on special order.  We arrived home to smashed door bell!  Wow the roofing guy must have heard that there was someone in the house and been THAT mad that we didn’t come to the door. Crazy! We thought maybe he had forgotten something and looked all around, but didn’t find anything.

Looks like we will be going with a different roofing company.  Grief!  Do these things happen to normal people or is it just us?

After a week of furiously looking for a van, we’ve decided to drive our old one a little longer and keep saving.