We had talked a lot about how we would spend our August money, but we hadn’t decided.  Then one day after I spent all morning schooling the kids, I just HAD to have some real Mexican food.  I loaded up the kids and was planning to go through the drive though of a little Mexican restaurant down the street and bring the food home to eat.  When I went to put the key in the ignition, I looked down at it because if felt strange in my hands.  This wasn’t my set of keys; it was Jason’s–the one without the house key.  I was locked out of my house at noon!  I called my husband, and we tried to track down my spare house key that I had loaned to a friend, but even if that had been possible, it would have taken several hours.

I took the kids to the restaurant and sat down with them.  I explained the situation and told them I thought this would be a good time to use our August money since we had to find something to do anyway.  Again we went through all the possible things that we could afford to do with our money.  They all wanted to go to a movie.  I was a little surprised since we had been to the dollar movie a few times throughout the summer, but since it was nap time and we obviously weren’t getting a nap in, I agreed that would be a good option.

The first theater I drove to didn’t have any appropriate kids’ movies at all, so we drove to the next one.  The only kids’ movie there was the Smurfs.  I didn’t have to wonder if they wanted to go or not.  They were all jumping up and down.  As we were walking up to the theater, I started to put my van keys away, and when I looked at them, behold, there was my house key.  I actually had BOTH sets of keys with me, and I wasn’t locked out of my house after all!  Ha, ha, the joke once again was on me.  There was no talking these kids out of the movie at this point, though.

As I paid for the tickets I noticed my shirt.  My huge pregnant form was covered in the smurfiest blue shirt possible.  Great.  I hoped no one noticed!  Or maybe we should all march in singing, “La, la, la, la, la la ….” 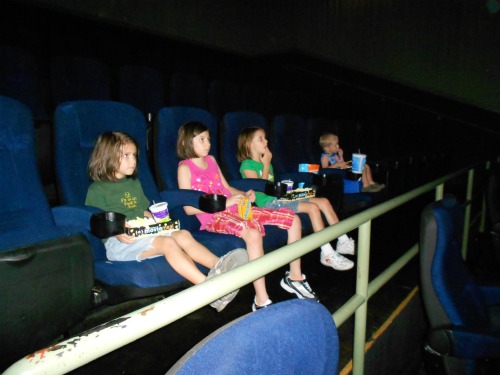 We walked into the theater, each with his own snack.  That’s what made the outing really special, being able to buy a snack at the theater!  Furthermore, there was no one in the room.  In fact, the theater was completely empty for the entire show as if we’d rented it out!  We all had a great time.

Thank you all for reading Laugh with Us Blog and making our little outing possible!