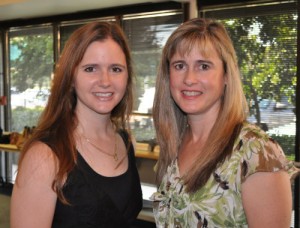 I am the youngest of four siblings. They are all two years apart, and I came four years later. We may not be that close in age, but I know what it feels like, at least in some ways, to be a twin.

From the time I became more of a young lady and not so much little girl around some time during high school, people started saying that I looked just like my second sister Miriam. I had always admired both of my sisters, but never thought that I was fortunate enough to look like either one of them. Though we were six years apart people began asking if we were twins. We would just laugh.

One time at a theme park my sister sat the ride out and conversed with a lady while I enjoyed the ride. When I came walking out of the ride area the lady saw me. Her hand flew to her heart and she sputtered, “But I was just talking to you…” before she realized that my sister was still standing next to her!

During my college years and while home for the summer (My sister had been living at home.) I arrived at our little church and found a pew. Pretty soon a man I had never seen before came over and asked, “Hi Miriam may I sit with you this morning?”

“My name is Esther, but you can sit here if you want to,” is what came out of my mouth.

He gawked at me and almost shouted, “How old are you?” I still laugh every time I think of it.

My sister and I now attend the same church. Her son is about six months older than my daughter. When they were still in the nursery Miriam said that they tried to give her my daughter more than once! She has had people come up to her and tell her, “I love your stories!” thinking that she is the blogger. One man looked at her in complete shock and asked, “You mean you’re not the one writing those stories?” Our church is big enough that many people think we are the same person!

Ah well, I think we have fun with it, but if you owe me money make sure you find ME. If you owe her money I would not hold it against you if you get it wrong! 😉