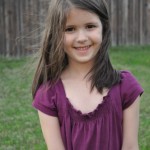 At the beginning of the school year (My children attend homeschool communities two days a week.) my kids arrived at “school” so excited to see their friends. They had missed them all summer.

We arrived at our Tuesday group and from the first it was obvious things were different. The girl’s good friends had over the summer found new friends. Joy, it didn’t phase her much. Her happy-go-lucky personality usually finds someone to talk to. Grace, however, was devastated. The only two girls in her class were now best buds so there wasn’t much hope of making other friends. She was completely left out. It broke my heart to watch.

Then Grace went to her Thursday “school.” To Grace’s horror she was placed in the 1-2 grade class while all the girls she knew from the year before went on to the 2-3 grade class. She couldn’t understand why she had been separated from all her friends. “Make new friends,” I urged, but I felt so bad for her. It was as if all of a sudden she was left completely friendless. There weren’t even any girls her age at our church.

Over those first few weeks we talked and prayed about “school.” She hated it and never wanted to go back. While there were only three girls in her class Tuesday, that class only lasted a few hours in the morning. For lunch and the afternoon there were many more children around to play with. One day I pointed out a sweet little girl and urged Grace to befriend her. One mention was all it took. From that day forward she has looked forward to “school” and going to see her good friend on Tuesdays. She is a happy little girl!

Grace continued to struggle with Thursdays but was doing okay, however she still would occasionally mention that it wasn’t fair that she had been separated from all the other girls that were in her class the past years. We have talked about it many times throughout the school year. Sometimes we prayed. We discussed things like making the best of situations. I told her that we don’t always know why things happen, but maybe there was a reason she may not have thought about or would ever know.

Last week her new best friend from her Tuesday community enrolled in and joined her Thursday “school!” Guess what? She is a year and a half younger than Grace and in first grade. They get to be in the same class! If Grace had moved on with all the kids from last year she wouldn’t have been in the same class with her friend.

When I picked Grace up from school she was bursting with the news. We stopped and thanked the Lord on the way home. I am so grateful that God did this work for my little Grace and that it was so clear for her to see. God loves her and cares about her troubles and now she understands that better!