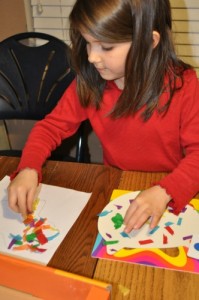 Homeschooling has been an interesting experience. There are great times and hard times and well, really perplexing times.

Grace is a bright child so I didn’t anticipate any major challenges in teaching her kindergarten. But as usual when I least expect a challenge, there it is! When will I wizen up?

For a year and a half I have been teaching her the letters and numbers. She has learned most of the letters and sounds, but she has a terrible time with two letters–both vowels. The English language revolves around five vowels. Try reading without two of them, no way! About half of the time she sees a little I she says the “T” sound. The rest of the time she can’t differentiate between the E and I sounds. I am told this is pretty common. We are at the point where she should be sounding out words though, and she just can’t sound them out. So…what to do? Do I just keep working on sounds? Will it just click one day?

Then there is the number issue. We count to twenty. She does very well, with one exception. She can not remember “Fifteen.” Every time she gets to this number she says, “Five teen.” I get it. I understand how that seems normal, but you would laugh at my efforts to get her to say, “Fifteen.” We jump up and down and say it. We wave our hands and say it. We do cheers, “I say fourteen you say fifteen. Fourteen…”

Every next day we sit down to count to twenty. I hold my breath as she counts, “Thirteen, fourteen…five teen.” Every. Single. Time.

I know that she will not go to college saying, “Five teen,” or not knowing her vowels. She will get it eventually! But for now I wonder do I push her to keep going? Do I spend more time on letters? Should I just let her play for a few weeks and then take it up again? She is a young five after all. What is the best for HER?