Thank you COOL WHIP for sponsoring this post. Join us on Facebook for inspiration and recipes for everyday treats. What you add makes it. #coolwhipmoms

We have simple desserts quite often.  I love to see the kids’ happy faces when they know there will be a dessert after the meal, but it also motivates them to eat their veggies with a smile…if they want dessert!

My kids are so excited to get involved in the kitchen.  The older two have had ample occasions to help me lately, but I wanted to get my three and five year olds involved.  It’s so much easier to do things for my preschoolers; I can to things faster.  But there is so much value in getting them involved!  The time spent with them is priceless.  What better way is there to learn fractions than as they measure out ingredients?  They are practicing fine motor skills as they serve themselves.  How precious when they love what they are learning!

Several of the kids had been asking me to make a banana cream pie.   Time was limited so we did a quick Make Your Own version.  It was so easy and fun.  Instead of putting a pie together we left all the ingredients separate for the kids to assemble themselves.  I knew my younger kids would love it, but it surprised me how excited the older ones were too. 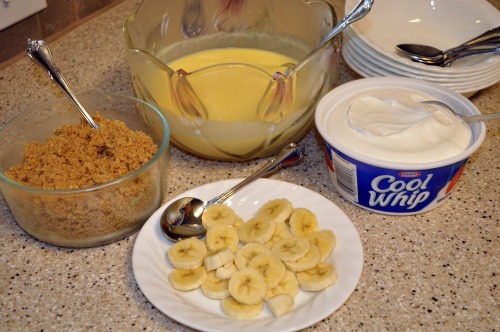 First we mixed up the pudding so that it would have a few minutes in the refrigerator to thicken.

(It only takes five minutes, and it’s so easy to have a preschooler mix it up.)

Mash the crumbs, sugar, and butter with a fork until it is mixed well and crumbly.

In 15 minutes we had all the ingredients ready and waiting for the conclusion of our meal. 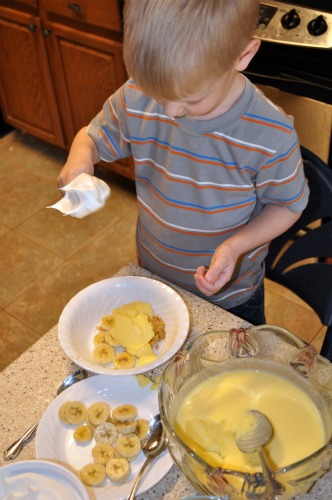 Little Jason thought it was so great that he could do it himself.  He felt so proud. 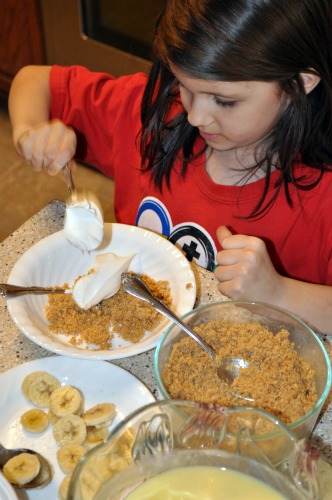 Grace filled her bowl and then mixed all the ingredients up!  I enjoyed watching her creativity!

“This is the best banana cream pie ever,” one of my girls exclaimed.  Of course everything’s better with COOL WHIP!

Sponsored posts are purely editorial content that we are pleased to have presented by a participating sponsor. Advertisers do not produce the content. I was compensated for this post as a member of Clever Girls Collective, but the content is all my own.