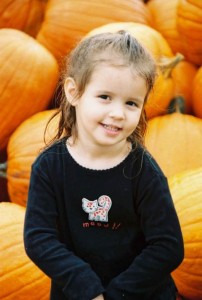 I have four children, and only one of them have I ever had to rush to the ER.  Of course we’ve had to take Joy three times!  That should tell you a little about our precious girl.  She is fun, funny, happy and sweet, but if anything gets broken she’s usually the culprit.  I wrote earlier about her third trip to the ER.  An officer pulled me over this week, and that reminded me of Joy’s first trip to the ER.

We were at a favorite restaurant and Joy (about three years old)  just would not sit still.  She was sitting by her dad, so he was the one getting a work out.  I think she was four at the time.  She kept standing up in her chair and finally the, “If you don’t sit down you might fall down and break your head,” warnings came true.  She fell off head first and hit her head first on the chair and then on the concrete.  Jason was not happy.  He immediately began the “I told you so” lecture as he picked her up.  I on the other side of the table, however, recognized her cry of real pain and watched wide eyed.  Our oldest daughter started screaming from the side of the table, “Blood!  She’s bleeding!” and then wailing, “She’s gonna die!”  Jason and I from our angles had not seen the blood yet.  “I think she really is hurt this time, honey,”  I said.  Jason finally took a breath, turned her around in his lap, and that’s when we saw the blood–and there was a lot of it.  The waitress brought some ice.  When we finally got a good look at the wound, we left the food and loaded the kids in the van.

There was a Care Now clinic close, so I ran in and explained what had happened.  They told me they didn’t handle wounds like that and for me to take her to the Children’s Hospital’s ER.  We didn’t know exactly where it was and were driving down a little two lane road looking for it.  Joy by now had quit crying and was acting like her normal silly self. That’s when we saw the lights.  You know, the dreaded blue and red flashing lights.

The officer told Jason he was speeding and asked him where he was headed.  Jason said we were taking Joy to the ER for a head wound.  The policeman looked in the back, and Joy nodded her head up and down with a big smile. “I’m going to the hospital!”  She was no help at all.  He said he was going to have to write Jason a ticket for speeding.  This is where I came in.  I told him that we had stopped at the Care Now place, and that they wouldn’t treat her, and that they sent us down this two lane road we’d never been on, and that we were just trying to get our little girl to the hospital.  Reluctantly, the police officer said that he’d let it go this time, but to drive safely.  I saved my husband from getting a ticket.  I was a hero!

We found the hospital and Joy very proudly and bravely received three staples in her head.  She came out with a  popsicle to boot.  I was thinking that she had had way too much fun and that this hadn’t taught her a thing about being more careful.  I was right.  About a year later, we were once again headed with Joy to the ER.

Joy’s third trip to the ER is recorded here: I Lost My Jewel