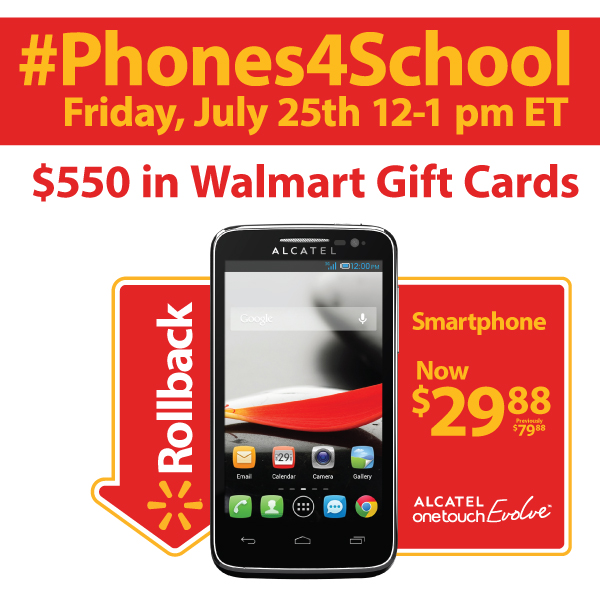 Do you love a good Twitter Party?  You know I do, and I am totally excited to host a party about Back to School savings with Walmart Family Mobile.  On July 25th at 12:00 PM EST, please join me for the #Phones4School Twitter Party where we’ll be talking about how you plan to stay connected with your student as they go back to school. I will also be giving you a chance to win prizes of $550 in Walmart gift cards throughout the hour!

We switched to Walmart Family Mobile over a year ago and we’re so happy we did.  We love that we’re saving money while still getting great service!  Now, just in time for back to school, their rates are the Lowest Price Ever at $34.88/month for Unlimited Talk Text & Web (First line only, price applies for the duration of the service plan if purchased within the promotional period) and $24.88/month for Unlimited Talk & Text. Plus, if you’re ready to upgrade to a smartphone, it’s more affordable than you ever thought possible because Walmart Family Mobile is offering a huge smartphone rollback: $29.88 for the Alcatel One Touch Evolve (reg. $79.88) – their lowest price ever for a smartphone! It’s easy to see that now is the perfect time to purchase #Phones4School from Walmart!

Ready to learn more? Join me for the #Phones4School Twitter Party where we will discuss how to save money on wireless plans for your student.

Join me and RSVP for the #Phones4School Twitter Party on SoFabChats!