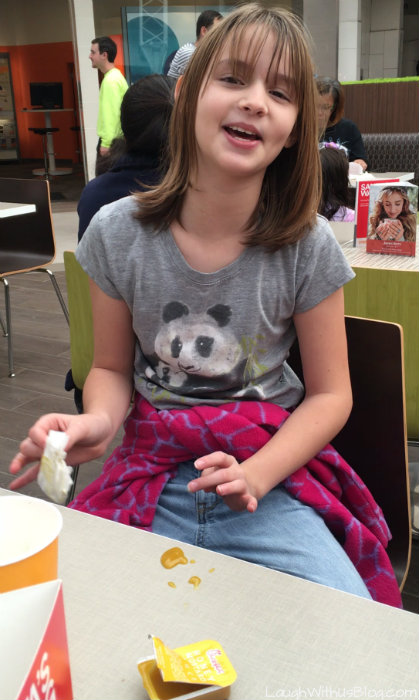 It was about a week and a half before Christmas and we were to be leaving shortly for my niece’s wedding.  A few of us had absolutely nothing appropriate to wear to a wedding.  Normally I avoid shopping anywhere with all five kids let alone mall shopping, but there was nothing to be done but grin and bear it.

I lavishly promoted the importance of good behavior and promised great rewards if everyone cooperated for pretty much hours and hours of waiting by women’s dressing rooms.

What?  You don’t think my 4 and 7 year old boys cooperated?  Get that grin off your face!  In fact they did superb thanks to Joy who took me at my word and worked for those promised rewards.  She was one of the few that didn’t need new clothes so she took it upon herself to entertain the three younger children.  She made up games, told them stories…I’m not really sure what all, but I was amazed.

With most of our outfits found it was lunch time.  As the prize I told the kids they could all pick anything they wanted to eat and they could each have their own.  They were super excited.  As a family of seven we eat out often, but always share.  Choosing their own thing and getting to have it all is nearly unheard of.

If they kept cooperating with me there would be dessert after the last few purchases after lunch.

I couldn’t believe it.  The kids made it super easy on me.  They all wanted Auntie Anne’s Pretzels.  We stood in line and ordered.  At the very last moment one of my kids changed her mind.  She wanted Chick-fil-A.  I had promised everyone could choose so…we carted all our purchases and the food half a mile to the food court that was completely packed.

The Chick-fil-A line was longer than ever so I instructed my eldest to find a table and sit down with the kids and to go ahead and eat.  Helplessly I watched my kids parade around a huge and completely crowded food court.  They couldn’t find a table.  Finally, I spotted one and began jumping up and down and pointing at them from across the huge, crowded room.  Yep, I’m THAT crazy mom, but they saw me, found the table, and sat down.

Then in horror I watched my four year old take off running in the opposite direction.  The other kids were eating.  I couldn’t breathe, but no, no way I couldn’t get out of my spot in line at Chick-fil-A.  Just when I was about to take off running my daughter looked up and noticed he was gone and immediately jumped up to get him.  Whew!

I grinned as I made it back to the table with Chick-fil-A in hand.  I had accomplished the impossible for my precious daughter and it felt good. We were all safe and sound.  Everything would be okay.

As we were finishing our meal, I noticed my daughter had not eaten the Chick-fil-A Honey Mustard sauce with her sandwich. Why oh why did I comment on it?

Joy then decided it might taste good with her pretzel.  I handed it too her.  As she opened it some of it spilled onto her and and the table.  Really.  Is that a big deal?  I guess she was as tired and frazzled after hours of shopping as I was because she had a full blown fit…over spilled honey mustard!

I was trying to talk her down.  People were staring. The rest of the kids were going crazy.  I was, in the midst of the chaos, laughing (of course) which was making my daughter madder.  Oh how I longed for a pause and rewind button.

Eventually we cleaned up the mess and everyone calmed down.  Then my four year old Bobby noticed the other unopened Chick-Fil-A Honey Mustard sauce on the table and asked for it.  He was still finishing his pretzel.  I hesitated.  After what we just went through would it be a good idea?  And then, as any loving (and insane) mom would do, I handed him the sauce.

Out of my children those are the two that don’t like to get dirty or have their hands sticky.  Another explosion erupted.  This time I wasn’t the only one laughing in the food court as all the people around me had witnessed the entire thing.

Wow.  Suffice to say everyone lost the dessert reward that would have been next, but they did cooperate enough to let us finish our purchases.

We were ready for that wedding Yessirree Bob!