After a day at Downtown Disney, we woke up bright and early determined to be inside The Magic Kingdom when it opened.  I had laid out all of the kids’ clothes the night before so after Jason and I were dressed, the girls took their turns in the bathroom.  I would get Bobby dressed and Little Jason was Jason’s job.  We became very efficient!

Little Jason was sleeping through all the lights and noise so we decided to get him up at the last possible second.  “Esther, he feels really hot,”  Jason said as he picked up the sleepy form of my four-year-old son, “Come feel his head.”

This could not be happening.  We had debated endlessly as to what day to visit Disney World.  We thought that the week after Thanksgiving would be less crowded, but my one concern was that we would be sick after a week’s vacation and cruise.  I felt his forehead.  “Oh I think he’s fine,” I said, wishing it to be true.  My husband kept insisting he thought Little Jason was sick.  Sure enough he was running a fever.  I gave him some Advil and we drove to McDonald’s for a quick breakfast.  Little Jason would not eat and then as we walked to the parking lot he threw up–my worst fear!

Then ensued the great debate as to what we would do.  It was our last day of vacation before we would be driving home.  Should we forget Disney all together?  We didn’t want to.  It was the main reason we drove to Florida.  Should one of us take him to the hotel while the rest of us went to Disney?  We didn’t want to do that either.  We went  back and forth for several minutes.  What if we took him and he ended up throwing up all day?  But what if it was an ear infection and he only threw up because of the high fever?

We decided to take  him and hope for the best!  “I can’t believe I’m THAT mom!” I scolded myself, “the one that takes sick children to theme parks!”  Had we been home I would not have let him leave the house.  Ah well to Disney we went.

There was no line at all when we got there.  We ran right up to the counter and purchased our tickets.  Then we boarded the ferry to enter the park.  I remember riding the ferry with my parents the first time I went to Disney when I was a teen-age. 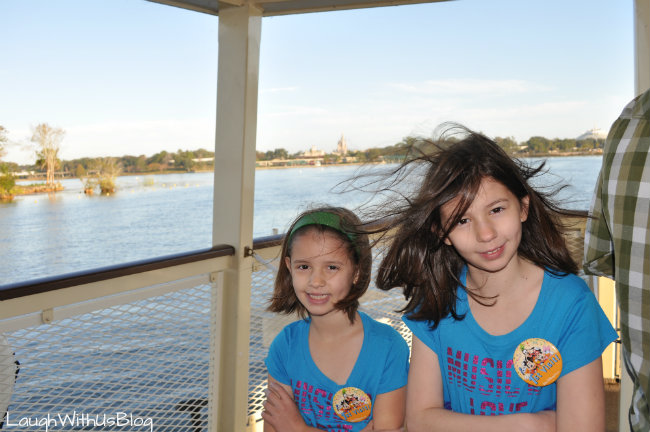 Don’t they look exhausted?  The park opened at 8:00 am so it was just before that as we ferried over to the park.  I remember the ferry being so exciting, but I guess after the cruise it was somewhat anti-climactic!  Ha ha! 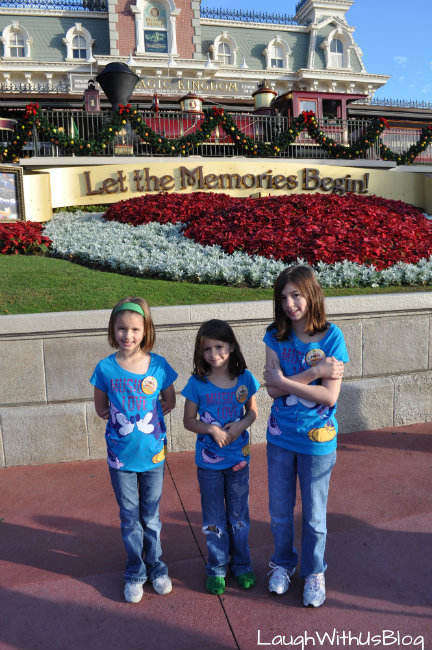 And so here we were.  Let the memories begin!