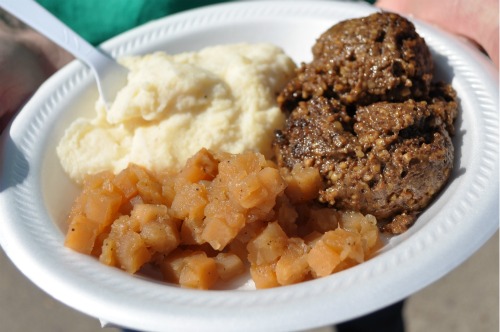 One of the things I looked forward to about going to the Irish festival was the food. I wanted to try something I’ve never had before that was real, authentic Irish food!

As it was getting close to lunch time we walked by all the vendors. Actually we walked up and down the street several times trying to decide what to eat. There were Reuben sandwiches, Irish tacos, sausages, Irish stew… Then I noticed a food cart’s sign. I didn’t know what they were selling but the sign alone convinced me it was authentic. I was feeling adventurous!

I watched as several went up and ordered haggis. “What is haggis?” I asked the vendor when there was a lull in traffic.

She looked at me kind of funny and replied, “It’s haggis.”

I stood there a little longer. A teenaged girl came and ordered a bowl of it so I cornered her and asked what it was. “Oh it’s meat mixed with yummy spices, and then you put this awesome sauce on it. It’s like heaven!” she gushed. 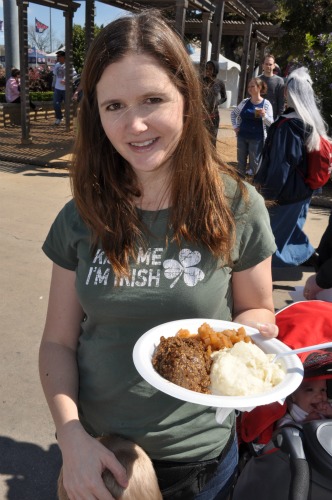 I was convinced. I stood in line and ordered my meal, “Haggis, Neeps, and Tatties.” Jason decided to taste mine before ordering one for himself. He took a bite, didn’t like it, and purchase a Gyro. I gave him a hard time. You’re not supposed to order Greek food at the Irish festival after all!

I took a bite of the meat. It was good. Really, it was. At least it was…fairly good. I tried the “tatties” and was happy to find that it was very tasty mashed potatoes. The “neeps” I gathered was some kind of vegetable, but wasn’t certain which. I ate the tatties, neeps and most of the haggis, and then tried to pawn the rest of the meat off on the kids. They all took a bite. I thought Faith was going to lose it all over the table, but we found her a napkin just in time. Jason tried to finish it for me, but he just couldn’t eat it either.

When we got home I was still curious and looked up the food online. Neeps are turnips! Then I found “haggis.” It is made from sheep’s offal. I didn’t know what “offal” was but it sounded a whole lot like “awful” in my mind. I kept reading–sheep’s offal is…(wait for it) lungs, hearts, and liver. Ewww! I felt sick. I could still TASTE it!

I spent the next hour eating anything and everything that I could find in hopes of ridding my mouth of the flavor! Beware the foods of March!

And if the joke wasn’t on me already…I went to all the trouble to go to an Irish festival to have Irish food, and it turns out Haggis is Scottish–go figure!

I’m linked with Time Warp Wife and Works for Me Wednesday.