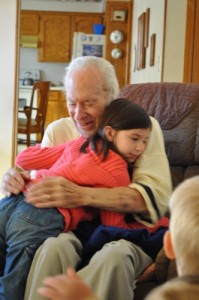 This was one of the last times we got to see him.

Grandpa Irish was born March 1, 1918.  After graduation from high school he worked as a cowhand on a ranch.  He entered the United States Army Air Corps in 1942 until he was honorably discharged in 1945.  After his time in the service he worked for a time at a grocery store and later became employed by the U.S. Postal Service where he was a clerk, postmaster, and rural mail carrier.  His job as a mail carrier kept him outside much of the time and from what the family has said, kept him out of trouble.  No, wait, they said it got him into trouble!

For example, he sometimes carried a slingshot with him.  There was one horse in particular out in a meadow on his route that he would try a little target practice on.  The horse got wise to that after a while and took off for the hills whenever he saw that mailman coming.

Grandpa Irish loved the out doors–whether it was sports like golf or baseball, hunting or fishing.  He enjoyed flying his Piper Cub airplane, and also often entertained at events as a magician.  He was skilled at building things out of wood, and had a talent for drawing sketches, painting, and writing poems.

He was a very good shot.  Sometimes he would take some of the pheasants he had shot and attach their heads to  poles and then stick those poles in the weeds by the side of the road out in the country.  Other hunters would come by, see the pheasant heads popping up and blast away.  They never got much of a dinner out of that.

Grandpa would use that spirit on his kids as well.  One of his daughters tells about how when she was young she used to dig through his pants pockets to find loose change.  Grandpa was on to that and one time he set a mouse trap in one of the pockets!

When Jason introduced me to the family, I saw right away that we would get along, except for my lacking knowledge of history he thought I was swell!  His stories from long ago were fascinating.  He loved making people laugh.  I am sure going to miss  him. 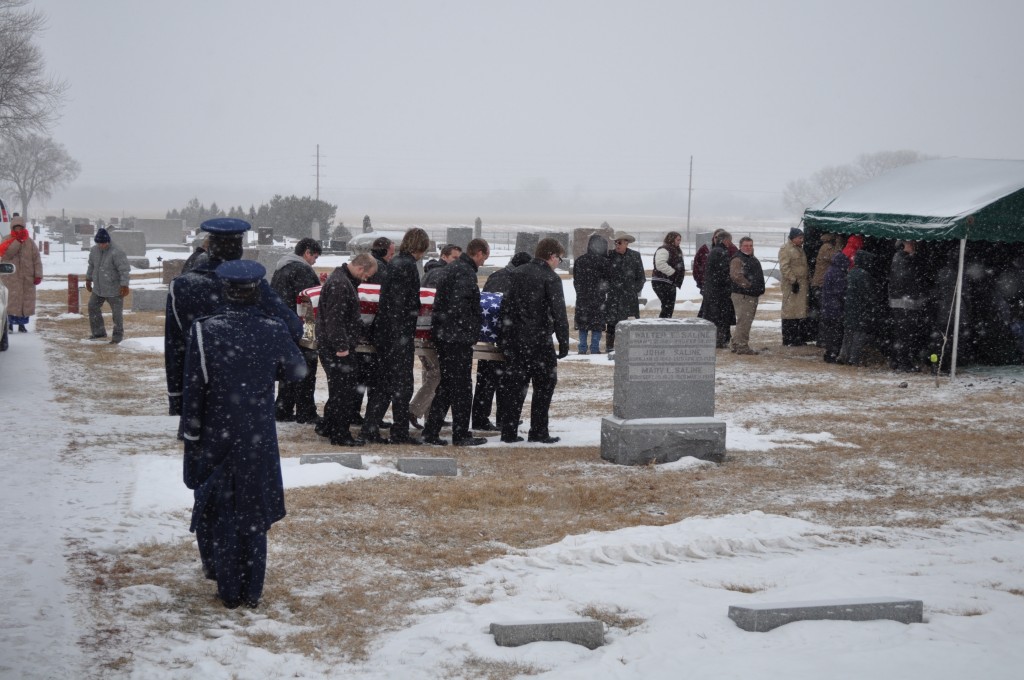 Entered into rest Thursday, January 13, 2011 and was buried January 18 with military honors.

*Most of my information for this post was copied from the flier that was passed out at the funeral and from the pastor’s personal notes.