For the first time EVER earlier this summer I left my husband home alone (Need I say more?) and took the kids on a week long getaway. What we did and where we stayed:

Lake Conroe Homeowners Sweetwater Condos Where we stayed and how to get a super deal on a condo.

April Sound Country Club The perks of staying at a condo instead of a hotel.

The Children’s Museum of Houston Fun playing and learning.

I’ve told you a few of the things that went wrong already in my post 5 Family Travel Tips, but I’d like to wrap up this road trip with the rest of the story.

Well, like I told you we had van trouble and my husband switched cars with me.  Though I drive his Rav 4 often, it’s not usually full of kids.  About fifteen minutes after we were back on the road Bobby, my three year old, decided to have a fit.  The girls in the the back could not make him happy.  He was screaming and kicking the back of my seat, something I’m not at all used to being that I usually drive a roomy conversion van, when lo and behold he opened the door–right there on the interstate.  Everyone in the car then began screaming, including me!  And this was still the beginning of our road trip.  Ha ha.  I managed to pull over, close the door, and figure out the child safety lock.  Thank the Lord for that!

On this trip we did a LOT of driving back and forth between Conroe and Houston or Galveston.  I’ve recently said, “It’s not an Irish family road trip unless someone throws up,” and that was true for this trip as well.  We found out the hard way that Joy gets car sick.  For some reason it doesn’t bother her in the van, but all the driving in the smaller Rav 4 was too much.  So.   Poor thing.  She spent days of travel doubled over in the seat with a baggie and yelling for me to pull over.  Yeah, uh huh, you’re not so jealous of all our summer travels now are ya?  Ha ha!  We did figure out how to keep her well enough for the trip home thanks to Dramamine!

Then there was the clothes.  It was the first time I ever let all the kids, except the boys, pack their own clothes.  Throughout the trip though, everyone had clothes and shoes to wear.  They did good.  It was the reverse packing that was the problem.  I got home with only half the boys clothes!!!!  One day while at the condo I found Bobby stuffing my dirty clothes pile into one of the dresser drawers.  I quickly took them out and told him not to do that.  “I’ll never look in here for our clothes,” I told him.  Ahem!  It didn’t occur to me right then to open and check the other doors…  Sigh.

My husband.  On the last day of our trip I asked him what he had been doing.  “Watching our marriage video,” he said.  Aw!  He missed me!  But, he said, he hadn’t done any dishes or cleaning the whole time we had been gone.  The morning of our drive home he must have felt inspired though because THIS is the site that welcomed me home… 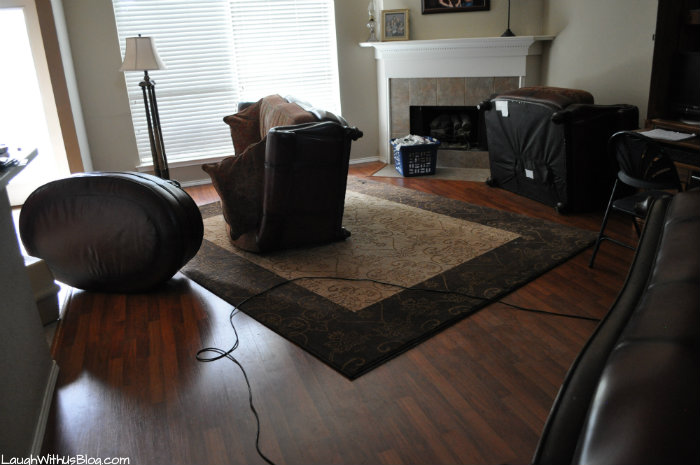 “Wha, what?  Is that?” you wonder?  Yeah, my thoughts exactly.  He began by sweeping.  Then realized the rug needed vacuuming.  While vacuuming, he saw some thing under the couch.  He moved the couch to pick up the stuff and saw spiders.  Next he saw spider webs underneath the furniture…  I always have to laugh.  He just cannot do a job unless it’s thorough!  I was happy to be home, and I was happy to have the furniture vacuumed even if I had to come home and help put my house back together.

More funnies from my engineer husband: You may have married an engineer if…