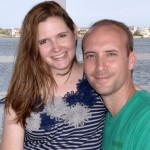 Yesterday we took the kids to eat tacos.  Jason took one of the girls and together they filled all of the cups with water and placed them on the table.  “I think these would be safer with lids,” I suggested to Jason.

“I think they’ll be fine,” he dismissed me.

“Okay, but it’s kind of dangerous,” I warned again.  I thought about starting a count down.  With five children it seems like one of them turns a glass over every meal time.  I had hardly gotten the words out of my mouth when Bobby reached out and grabbed Grace’s glass and dumped it all out!  “Well, there ya go!”

After we put the kids to bed Jason and I watched a movie together.  We own a ClearPlay DVD player, which I love, but sometimes it freezes in the middle of the movie and we have to start it over and try to get past the offending spot on the DVD.  This happened last night.  I handed Jason the remote and asked him to fix it.  Several minutes later he landed on the exact same spot and the picture was once again frozen.  “Why did you do that?” I asked and was full of ideas of how he should have done it.

“Here you fix it then,” he handed me the remote.  Confidently, I began forwarding the movie my way…and ended on the very same spot with the picture frozen once again.

“Yeah, that  helped a lot,” my husband said.  And we both burst out laughing!