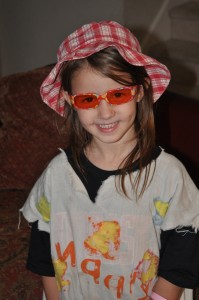 The other day Joy, age six, came pounding down the stairs during quiet time.  She was wailing and flailing, but that is the usual drama we see several times a day.

“Joy, you are not supposed to be out of your room at quiet time.”

“What is the matter?”

Finally managing to find some words, she cried, “I lost my jewel!”

I got up and took her hand and led her back to her room.  She continued the drama so I sat on her bed and put her in my lap.

“Listen, I understand that you lost your jewel and that is very sad, but that is not a reason to come out of your room.  Did you look for it?  Maybe we’ll find it later laying on the carpet.”

She started wailing with renewed gusto.  “You don’t understand!”

“I lost it in my noooooooose!”  she finally wailed.

“Whaaaaaat?” I asked not wanting to believe it.

Well poor little thing was so distraught, but in true Esther fashion I fell over on her bed I was laughing so hard.

I tried to get her to blow it out.  Then finally I told her not to worry about it to go back to her quiet time.  I really didn’t think it was that big of a deal.

That evening, however, Jason, realizing the potential danger, took her to the ER, and they were able to get the plastic bead out without much trouble.  In the meantime, I had read horror stories online about what can happen when a foreign object lodged in the nose can’t be removed easily.

When we got home, I asked Joy if she was ever going to stick something up her nose again.  “No!” she almost shouted. “I don’t like the hospital!”  She would know.  This was her third trip to the ER in three years!