We have had more trouble with losing my three-year-old Little Jason than any of our other children.  He is kind of a quiet, but happy, giggly child.  The first time we lost him was coming out of a pizza entertainment center.  Jason took the kids around the van to get them in their seats while I tended to the baby and stroller in the back.  When I finished, I went to the side of the van and looking around asked, “Where’s Little Jason?”  My husband looked at me blankly and then did a quick search of the parking lot.  We found him pretty fast.  He was hiding underneath a truck.  Yep that pretty much gave me nightmares!

The next time I lost him was as we were coming out of the movie theater.  I told Little Jason to hang on to my side, and the next thing I knew he was gone.  A few seconds later we found him in a nearby hallway.  Still, our heart stopped!

So when we went to the Huston Children’s Museum on our recent trip we knew to keep a close eye on him.  It happened to be free day at the museum, and we were completely  unprepared for the hoard of people that were there.  In fact, we got there a half hour early and waited in a long line just to get in.  The first half hour was fine, but after that it was just mass children everywhere we went.

We tag teamed who we were watching, had them stay in pairs at times, and kept a close eye on all of them.  As we were leaving the jungle gym section and entering a separate room, we corralled everyone.  Little Jason puckered up to cry.  He didn’t want to leave that fun room.  I assured him there was lots more fun to be had in the next room, and we all went through the doors.  A minute later I looked around and didn’t see Little Jason.  I asked my husband, and we both began searching.  We looked throughout the entire room several times and still could not find our little blondy.  Anxiety was building as we looked around, but when we were certain he was not in that room with us, panic set in. 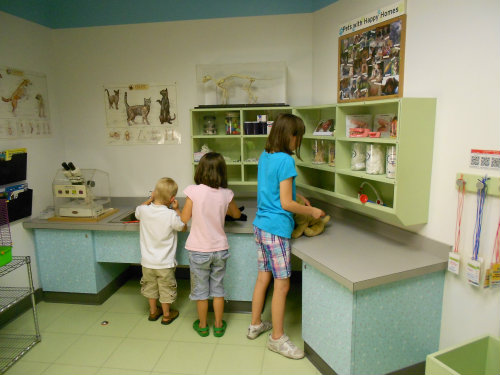 Just minutes before it was overrun with children.

The only other time I’ve ever seen my husband this panicked was after the birth of our first child when I hemorrhaged and he was rushing me back to the hospital, uncertain if I was going to make it.  Other than that he has always been cool, calm, and collected, until this was happening.  He was so agitated, I don’t think he was thinking clearly.  He grabbed two of the kids and said he was heading to the front to report a missing child.  I took the other two and frantically ran to go back and look in the room we had come from.  I was praying continuously as I searched the next room.  I can’t even describe to you the jumble of what ifs and far reaching images and scenarios went through my mind in that period of time.  He wasn’t in the room, so I started up the stairs to the jungle gym maze calling his name.  I looked up, and there he was walking down the stairs content as could be.

The instant I saw him and knew he was safe my concern switched to my husband.  He was going crazy, and I had to get word to him that Little Jason was okay.  I tried to call and text him as I battled the crowds to get to the entrance of the museum.  When I got there my husband wasn’t there.  I had him paged, but he still didn’t come.  After several minutes I finally caught sight of him above the crowd.  In his panic he had been going around and around and couldn’t find the entrance of the building.

Having found their brother the girls were ready to get back to the fun, but after what we went through we weren’t about to take that chance to lose anyone else in that crowd, so we cut our time there short and took our very disappointed girls out to the van.  It took a good hour before my husband and I both calmed down after that experience.  We probably lost him for a total of five minutes.  If felt like at least an hour went by!

Have you had a child that slips away quietly like this?  What steps have you taken to make sure that doesn’t happen again?  We’re planning to take the kids to Disney World this winter (Yes it’s my dream come true!) and I want to be better prepared.

UPDATE: We did take precautions on our Disney trip, but yes, we still managed to lose him, so scary! Here’s what happened: I lost my child at Disney!