We did spend a wonderful day at Disney’s Magic Kingdom!  It was about three minutes until seven o’clock when the park was suppose to close to all those who hadn’t purchased Mickey’s Christmas Party tickets.  As we were walking to the exit, Jason noticed a sign that we thought was the last showing for Mickey and Minnie.  Jason had us hurry and get in line.  He didn’t want us to miss anything.  It wasn’t until we were all the way there that we realized it was just a photo session with Mickey and Minnie, but since we were already in line we figured, “Why not?” 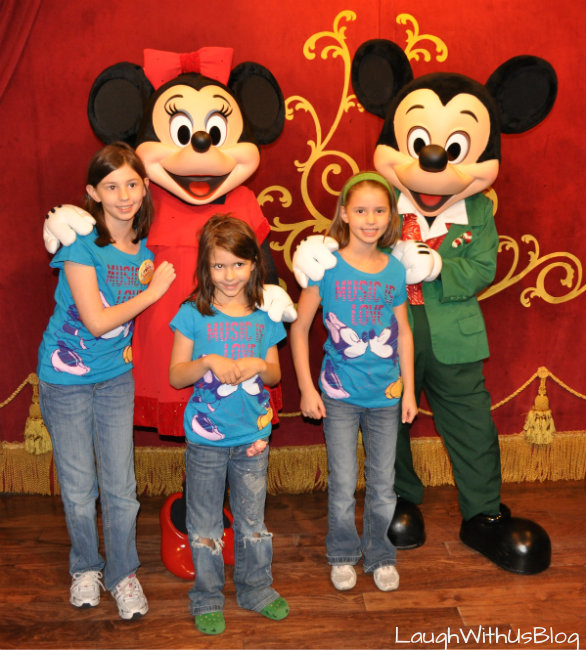 We waited our turn.  When they motioned to us, the girls ran right up there and I snapped this photo.  “Now I want one with the boys too!”  I was holding Bobby, but I looked around and didn’t see Little Jason.  I called to him thinking that he must still be behind the curtain, but he wasn’t there.  In fact he wasn’t any where.  We lost him!  I couldn’t believe it.  I had been so worried about losing one of them at Disney, and we lost him at closing time!  While Jason started running around looking for him, I fiddled in my fanny pack.   (Yes, I still rock the fanny pack!)  After losing Little Jason at the Houston Children’s Museum, I wanted to be prepared for Disney so I purchased a child safety alarm child locator.  I found my little gadget and frantically pushed the button.  I didn’t  hear the alarm.  I pushed it over and over, but I couldn’t hear anything.

One of the workers finally noticed our frantic calling and told us that someone had just come in asking if anyone had lost a child.  They said they were taking him to the lost child center.  We breathed a sigh of relief and just prayed that it was in fact our Little Jason that they had.  We all took off to find the lost child center, and as we walked we met the Disney worker who was taking him over there.

She had been on route with our little boy when the alarm started going off.  Every one was looking at her and it kind of scared her.  She didn’t know what to do so she took him back to the building where we had been!  Even though we didn’t hear the alarm I guess it did serve to draw attention.  Little Jason did not seem to be the least bit phased about the whole thing.  Oh wow, not the excitement I was looking for after a full day at Disney, but I was thankful it was relatively painless to find our little guy! 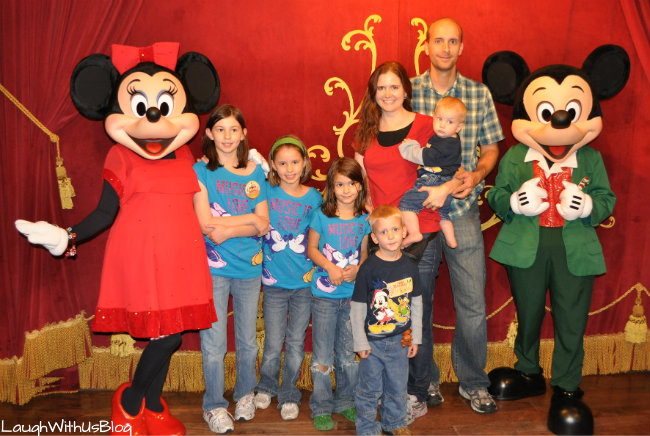 They let us go back to the front of the line and get our family shot with Mickey and Minnie.  Oh and about two seconds flat after the above photo was taken Bobby turned to look at Mickey and FREAKED out!