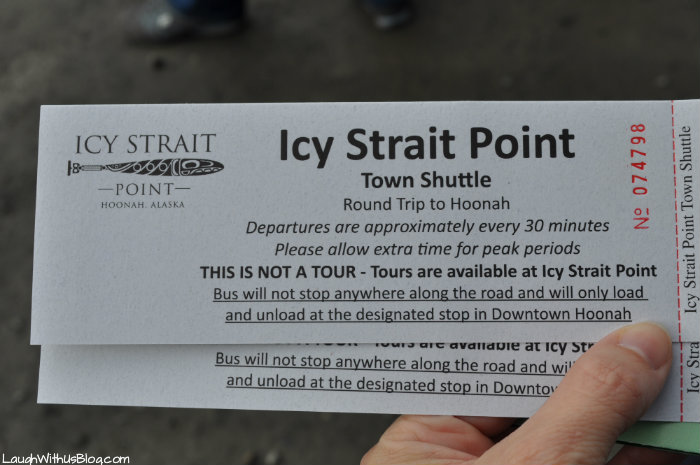 As we were walking the trails at Icy Strait Point friends were talking about taking the shuttle into the town of Hoonah.  I didn’t know anything about Hoonah, but for $5 we could take the round trip shuttle.  Five dollars sounded like a great deal!  One of the things we learned while visiting ports in Alaska is that so many places offer great deals on sight seeing from the ports.  When it comes to city tours and such there really is no need to pay for the expensive excursions. 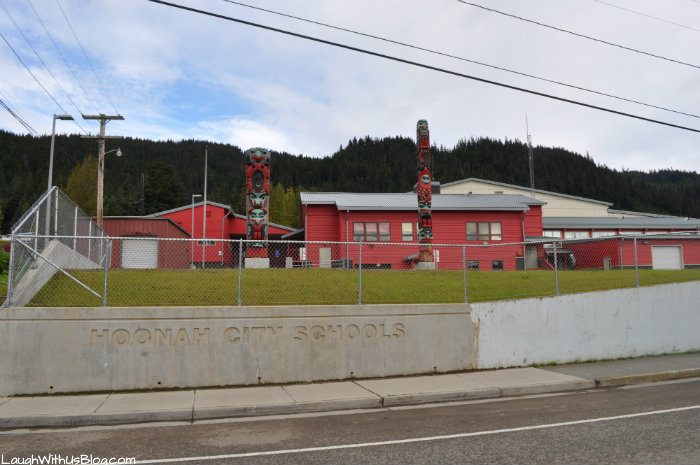 The driver was fantastic and gave us lots of history and facts about the area as we rode the shuttle.  Hoonah is a small Tlingit village.  Most of it’s less than 900 residents are of Alaska Native Heritage.  We were told that over the winter less than three hundred stay in town. 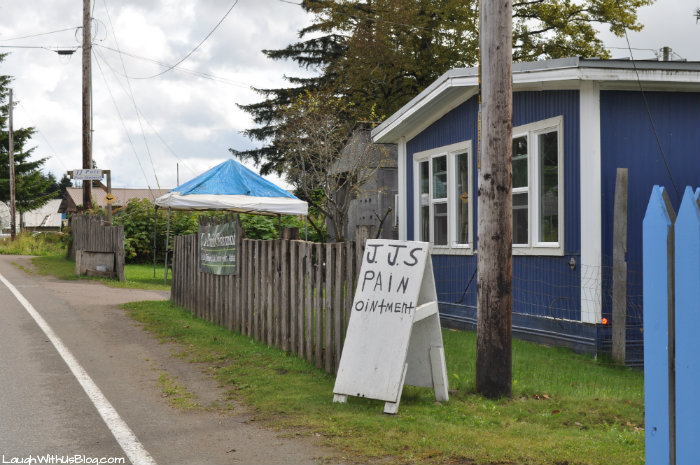 “Visit JJs Pain Ointment” we were urged by the the bus driver and others before boarding the bus.  I had no idea why that was something of interest and was even more surprised when I saw the humble location.

As we were looking at and sampling the ointments, the Tlinget lady that makes and sells it came out and told us all about how she makes it.  It was very interesting.  I have to say though I was skeptical.  One of the friends we were with tried it on his hand that he said he has chronic pain in.  Within a few minutes he said he could swear his hand felt better.  He went back and purchased a big jar of it.  I was intrigued and bought some for my dad.  I still haven’t received a report as to how it has helped his pain, but the people in Hoonah sure seem to believe it works! 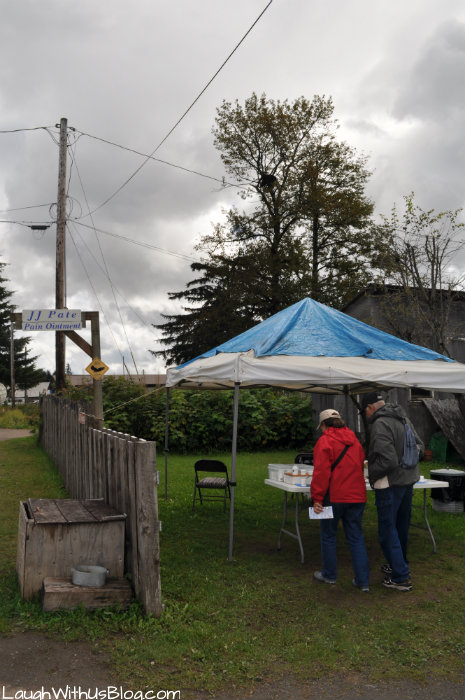 There was an eagles nest high up in the tree.  Here again we could see the nest but no eagles.  I was beginning to wonder if I would see any wild life in Alaska! 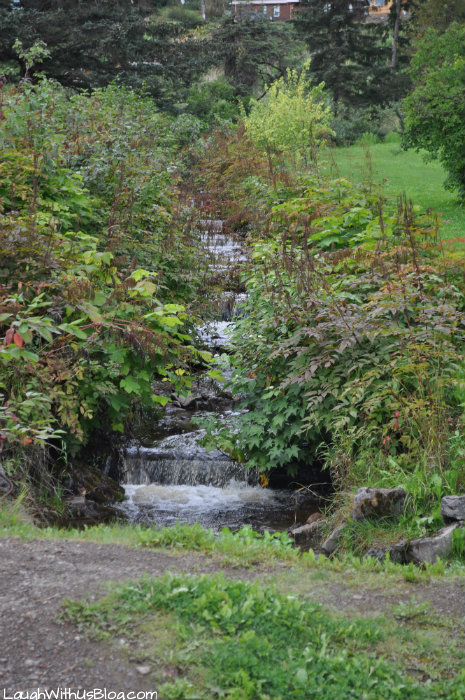 As we walked around the town this was by the road.  I was continually amazed at the beautiful displays of water everywhere in Alaska! 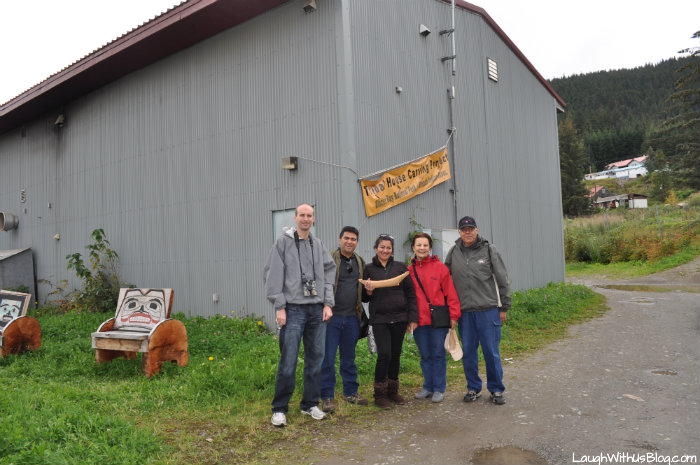 Next we found this building and someone encouraged us to go in.  I really had no idea what I was doing except following the crowd.  As it turns out we got a first hand view of the carvers at work that are making the Tribal House Carving for Glacier Bay National Park.  We didn’t get to visit Glacier Bay on this cruise.  We are told it is the most beautiful though it’s hard to imagine more beautiful that what we did see.  But if we get to go again I want to be able to see the finished project at Glacier Bay. 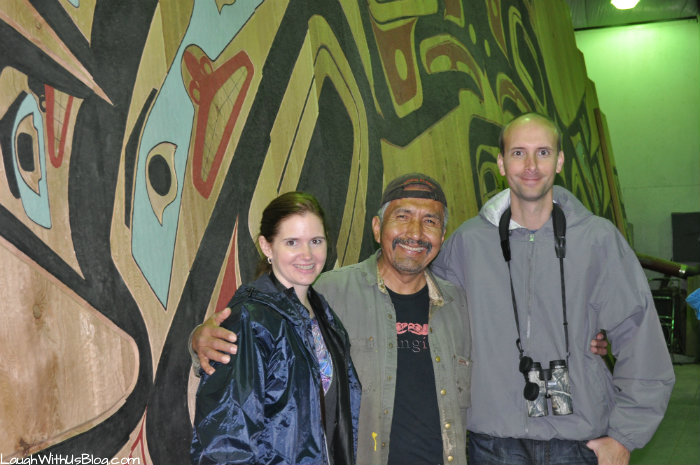 Owen James is one of the famous carvers.  He stopped what he was doing and talked to us for a long time.  He told us all about the project and other totem poles that he is working on. 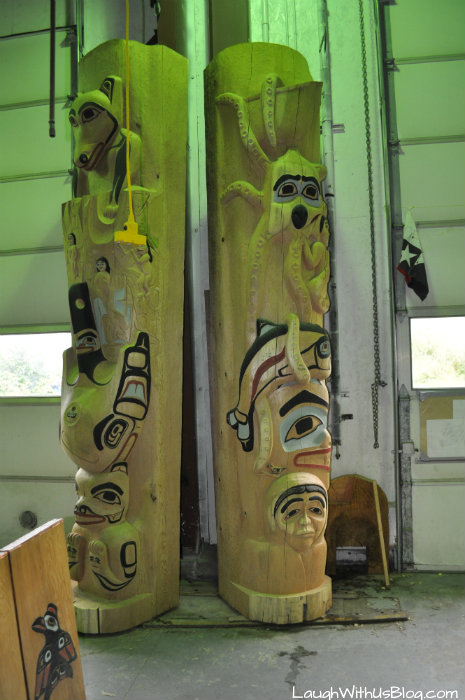 Like this one on the right that is based on a Tlingit legend about a giant octopus that was killing their people.  I want to see the finished product some day as well!

By the time we left Owen we were getting hungry and it began to look like it might rain so we got in line for the shuttle bus back to our ship.  We had a very rich day of scenery and culture and all we spent was $5 each.  This might not be for the thrill seeker, but if you love scenery, people, history, and culture you will not be disappointed in Hoonah.

One lady we talked to said this was her fourth time to cruise this port, but her first time to get off the ship.  She was so glad she did!  Don’t miss Hoonah, Alaska!