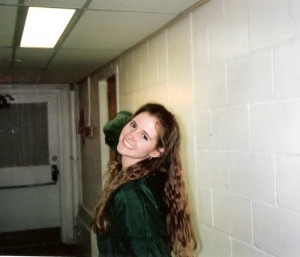 One of the few pictures of me from my college days, stolen from a friend’s Facebook photo album. 😉

So no one should be surprised that I have inherited this very same trait of unpremeditated honesty.  In college several girls needed a ride to apply for a telemarketing job, and since I had a car (tank is more like it) I offered to drive them.

I hadn’t planned on filling out an application, but when I got there the supervisor assumed I was there to apply, so I figured it couldn’t hurt.

The advertised pay was $7-$9 an hour, a huge improvement from $5.35 at my previous minimum wage job at Mr. Bulky’s. As I filled out the application, I came to the part where you write how much you expect to make at this job. That was easy–$9 I wrote.  Duh, it was advertised.

We finished our applications and then waited as one by one each one of us went in to interview, something I had not anticipated.  The manager had reviewed my application and was ready with questions when I walked in.  “If I asked your former boss what your greatest asset is, what would she tell me?” I told him that I really enjoyed selling candy, and I had worked really hard to win several of the in-store high selling competitions.  “All right now, if I asked her what your greatest weakness is, what would she tell me?”

Without batting an eye I replied, “She would say I have no initiative.”  His eyes bugged out, his jaw hit his chest, and he may have even dropped his pencil.  Well, it was the honest truth. She had given me a review and the criticism I got was that I didn’t take initiative when it came to making displays and decorating the store.  I guess he wasn’t used to people being so honest.

“OK,” came my perky reply.  He blinked fast about five times and looked back down to the application.

He must have been a pretty frank person himself because next he told me we were all over dressed.  How rude of him.  Surely he had to be joking.  I told him that we usually wore dresses (it was a requirement at our school), and he looked very skeptical.  I pointed at his sweats and T-shirt without thinking and asked, “You don’t expect us to dress like THAT do you?”  Funny thing was that he hired me anyway.  See, it pays to be honest!  Ok, so I never took the job, but it would have paid!