I was determined to stay on my fitness routine. Packing for my media trip to Mayberry I looked down and saw the sports bra that my sister had given me in her bag of hand-me-downs. Usually her gifts are more for the kids, but every once in a while I find some gems that work for me too. I picked up the sports bra. It was my size and brand new still with the tags on it. Perfect. I threw it in my duffel bag.

Fast forward to my first night in Mayberry. I was tired from the day of travel, but I wasn’t going to let that stop me. I HAD to get my workout in. I grabbed my phone, readied the app, and went to change clothes. I cut the tags off my brand new sports bra and slid it over my head. Getting it over my shoulders took some doing, but I tugged and pulled and was ready to work out, but wow the thing was so tight. Had I gained that much weight?

If only doom would just come out and warn me once in a while! Happy to get my workout over with, I began my (cough) yoga. I’d never done yoga before, but it was the next video on the app I had purchased, so onward I went. I don’t think of myself as a highly uncoordinated person, but y’all the yoga thing just ain’t for me. It’s supposed to be so…serene. Yeah, not so. I could not hold the crazy positions and kept falling over. I felt so awkward! I was glad I was in a room by myself!

A few minutes into my yoga spectacular the app quit working. I picked myself up off the floor to find the problem. The hotel wifi was not going to allow me to stream my workout. Grr! Forget it. I was going to bed!

You know what’s coming next. Why, why, why do these things happen to me? At first I just thought maybe my arms were tired from the five minutes of yoga, but y’all the sports bra wouldn’t budge. After quite some effort I managed to get one arm through and the thing was stuck on my shoulder at a strange angle. In my efforts I walked by a mirror, saw myself, and died laughing. The fixes I get myself into. If only I was as good as getting out of them!

I’m slightly claustrophobic and as soon as the thought struck me that I might not be able to get out of the thing, like a rabid animal caught in a trap, I went completely nuts. I alternated between fighting the darn thing, laughing my head off, and panting for breath. I don’t know how long I struggled, but I couldn’t get the sports bra off!

Think. Think. Think. If I had been home, I would have grabbed the scissors and cut the thing off, but I was in a hotel room by myself. I had gotten so tangled up in the sports bra, that I couldn’t even get a shirt on over it to walk to the front desk to ask for scissors. I only knew one of the travel writers on this trip, but I didn’t know her THAT well. I pondered how she would respond if I messaged her. I could picture it. “Jackie, Help! I’m stuck in a sports bra, and I can’t get out!” No, no, no, no. I couldn’t possibly.

With renewed determination I went to war with the sports bra. Miraculously I was able to finally get one arm out and then the other was easier. I was free!!!

The next morning at breakfast I told Jackie my story. She laughed and laughed, but assured me that she would have helped me. Maybe she does know me well enough, because she added, “I can’t wait to see what else happens to you on this trip.” Yeah, about that…I’ll save that story for another day. (Tada! I’ve added that story here>>> I wore a new pair of shoes once…

When I got home, I called my sister and told her the ordeal. She was after all the one that gave it to me in the first place. She laughed and said…”The same thing happened to me!” She got stuck in the sports bra in the bathroom at work thinking she’d squeeze in her workout on her lunch hour. Ha ha ha! She said she gave it to me thinking one of my kids could use it… 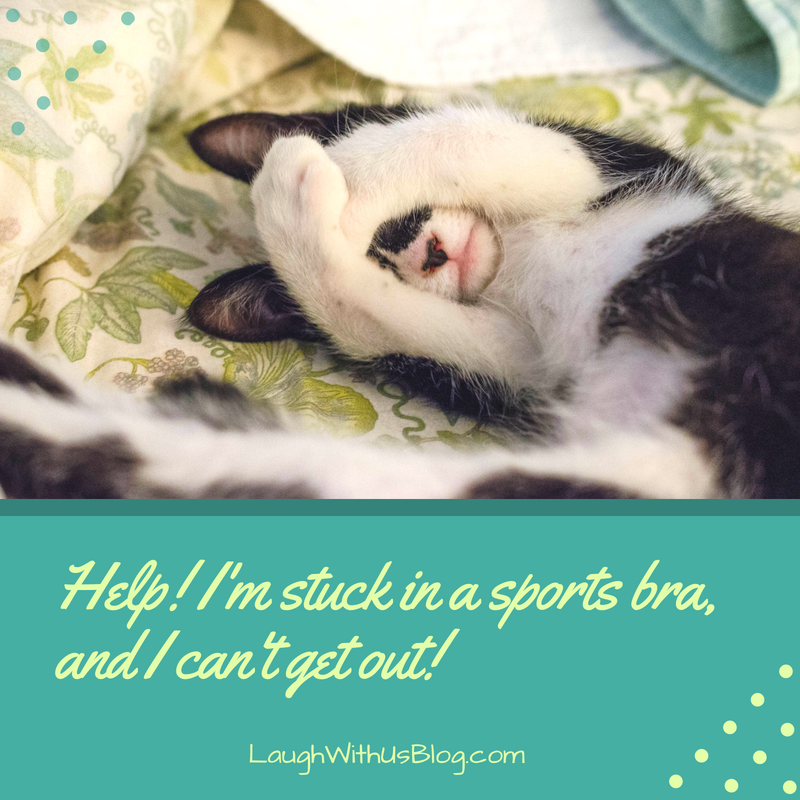