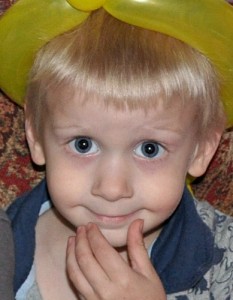 One day I decided to get a break from the school work and took the kids to McDonald’s to eat…but mostly to play.  My oldest is ten and still enjoys it with the rest of them.  I figure I don’t have too much longer that it will work for all of the kids.

They had a grand old time making friends, playing hide-and-seek, and screaming.  Around and around they went.

After we had been there a while, Little Jason just barely three years old now, decided to walk around the tables.  I watched as he walked over and then very slyly took a little girl’s napkin off her table.  I don’t know why he thought he needed the napkin, but I went over and told him gently that this napkin did not belong to us and that he couldn’t take things from other tables.

The little girl was about six years old, and her mother was absent. The child caught me totally off guard when she very haughtily barked out, “Yes, that’s my mother’s!” and took the napkin from Little Jason.

Well, if you know me, then I don’t have to tell you that right then and there I burst out with a huge, “Ah ha ha ha ha,” laugh!  The little girl had no idea how to respond to that and just looked at me in shock.  It was then that her mother entered the room, and obviously well acquainted with her daughter, asked, “What did she say this time?”  This was my kind of mom.  We laughed and swapped stories for a few minutes before it was time to come home and get back to the daily grind.  Sometimes a little laughter and change of pace make all the difference.