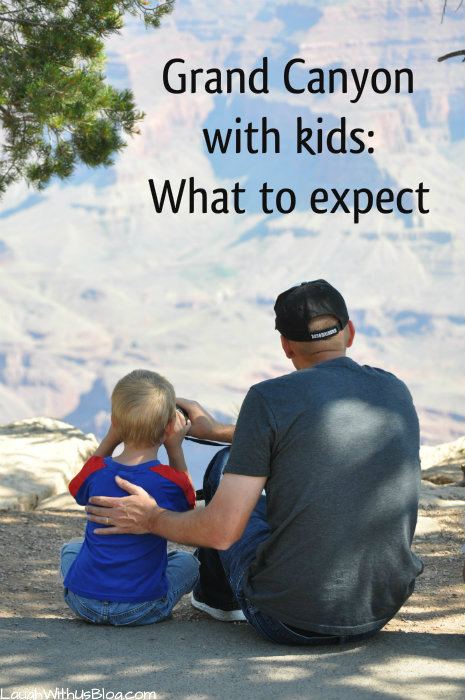 It was my first time to see the Grand Canyon. I was so excited to be taking the family and cross that off my bucket list. Anticipation was high. We drove the hour from Flagstaff, connected with our tour guide, and made our way to the rim for our first view of the Grand Canyon. 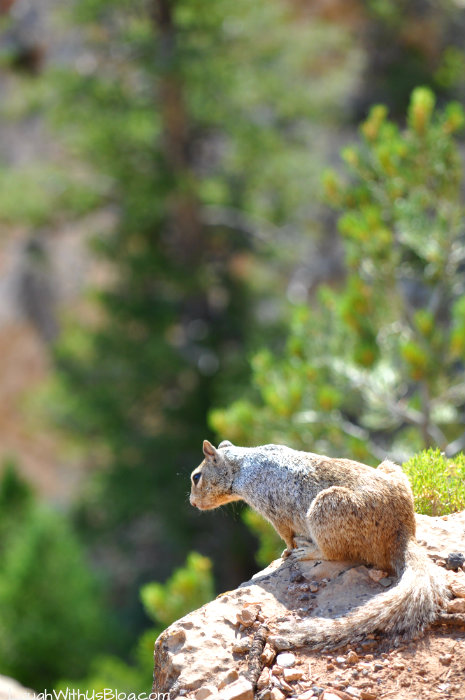 “SQUIRREL!! Look, Mom, a squirrel,” was the first thing my children had to say when the Grand Canyon came into view. Ha ha. We actually have squirrels at home, that eat the pecans from our trees. Who cares that there is a squirrel on the edge of the Grand Canyon? My family apparently! I have to admit it only took seconds before it drew me in too. 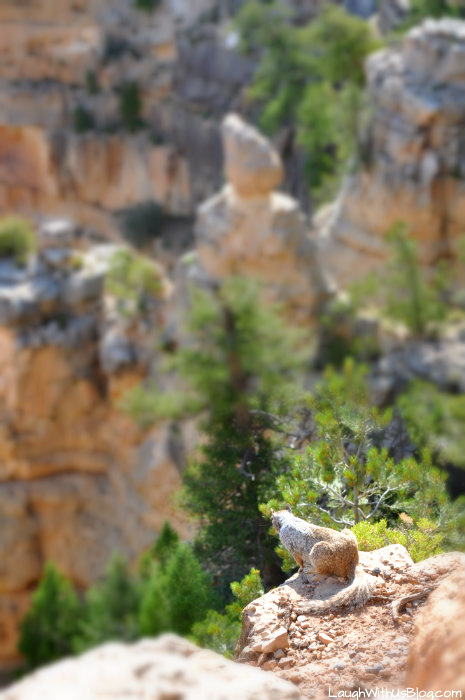 Was it going to jump? Would we see a squirrel commit suicide at the Grand Canyon? 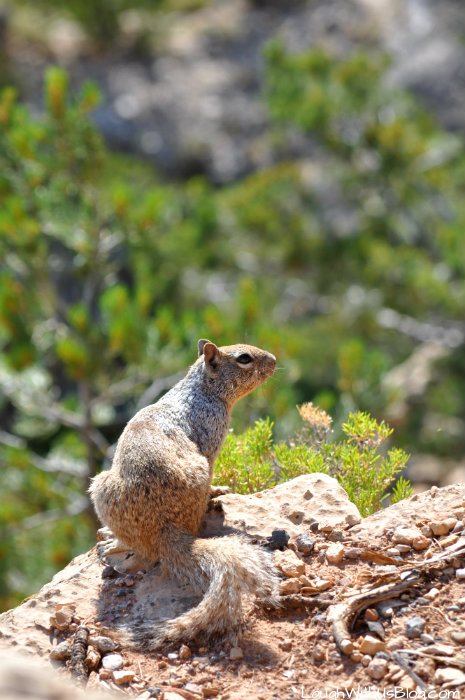 Nah. He turned around and climbed out of sight. Thank you Mr. Squirrel. Now we can gaze at the grandeur that is the Grand Canyon! 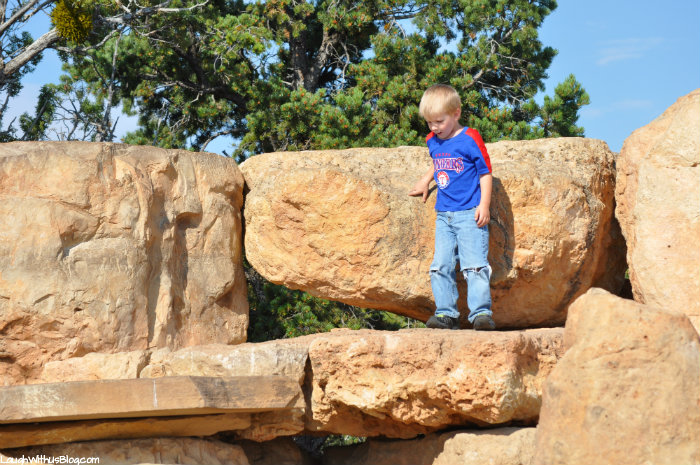 Ooo see the look of wonder on my boys face? No, he is not gazing at the Grand Canyon. He is looking down at the awesome ground because this is such a cool place to jump from. 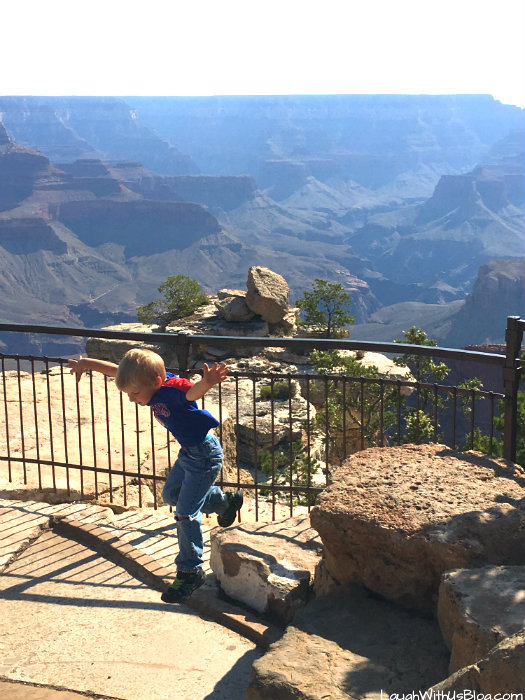 2. Kids may be more interested in climbing on and jumping off rocks than gazing at the Grand Canyon. 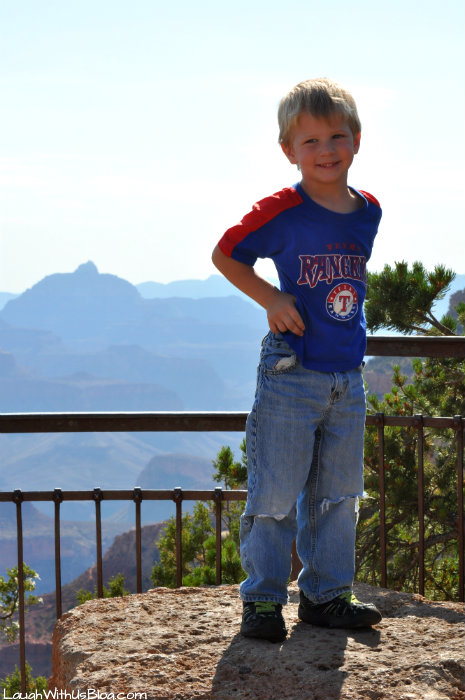 3. There are many rails along the rim of the Grand Canyon to help kids stay safe while they enjoy the beauty.

Would my boys fall in? The fear was real. After having hiked Church Rock in New Mexico and navigated the dangerous trails there,  I was petrified of the Grand Canyon. Now I’m sure there are trail into the canyon that would be dangerous for kids, but walking the rim did not present a problem for us. The rails don’t cover the entire rim, but there many places with rails. 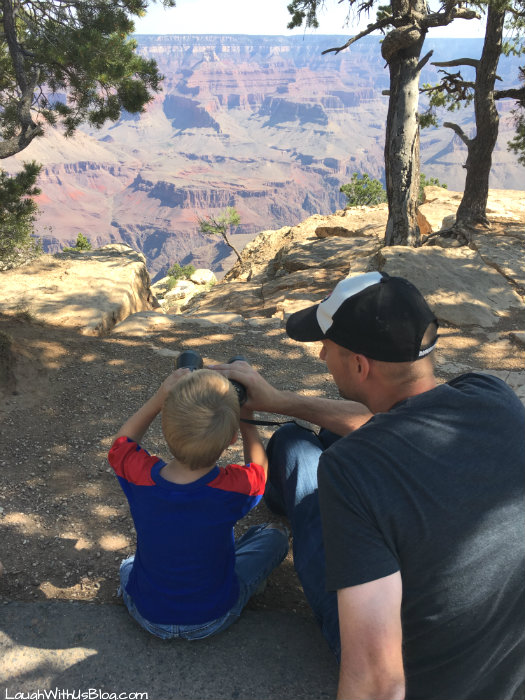 4. The walking paths are wide and not precarious.

My boys are seated on the edge of the walking path here so you can see there is lots of ground even between the walking path and the cliff. Now, you know your own children. If you know your kids will take off running then take measures, but our boys were fine. My husband kept a firm hold on my four year old and I held my 7 year old’s hand any time there was question. 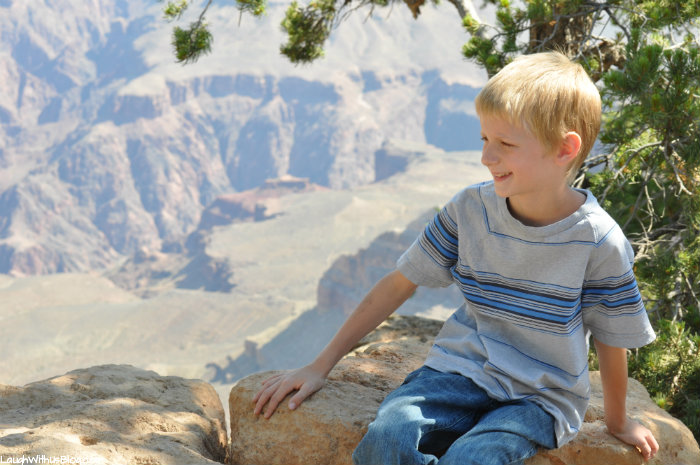 All that worry about taking two small boys to the Grand Canyon was really much ado about nothing. Now don’t get me wrong there are places to walk out on ledges from the trails. Know your kids. Keep a good eye and hand on them and you will all have a great time exploring the Grand Canyon.