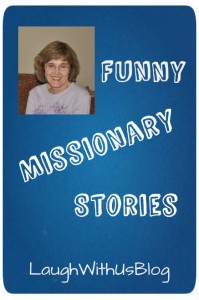 If you’re new here, Frieda is my wonderful mother.  Today she is continuing some  deputation stories from when she and my dad first started out as missionaries.  If you missed it, part one is located here.  Enjoy her story below.

At one church, we were again asked to stand in front of the communion table at the front of the church while the congregation filed by to shake our hands. A lady came barreling up the isle calling out excitedly, “Frieda, I’m Jerry’s mother!” and enveloped me in a bear hug. My problem was that I didn’t know who in the world she or Jerry might be. Eventually, she calmed down and explained that our families had shared a duplex in Dallas, and Jerry had been my playmate when I was three years old.

My uncle, a Southern Baptist pastor in Long Beach, California, invited us to spend about a month visiting his family and speaking in churches in the area. He had lined up appointments for us in different churches for Sunday mornings and evenings and often for Wednesday nights also.

We set out on Route 66 from Clinton, Oklahoma, to Long Beach in our ’54 Chevy. Hal said we couldn’t go over 40 miles an hour because the motor was knocking (whatever that means). He kept trying to explain to me how it sounded and couldn’t figure out why I didn’t hear it. I just heard car motor noises. It was summer time and the temperature as we crossed the desert reached 120 degrees. Of course, the car didn’t have air conditioning. We rolled the windows up because the hot wind was more uncomfortable than the sweltering heat with the windows up.

When we got to Needles, Arizona, we stopped for a blessed rest at a restaurant that was air conditioned—that is, it had window units with water flowing through some kind of straw. We each ordered (splurge) a chocolate sundae. The waitress wrote our order down, then looked at us seriously and said, “Oh . . . I’m sorry, we don’t have any bananas!” We looked at each other, wondering if the heat had unhinged our brains, but the waitress realized her mistake and went on. We laughed so hard we nearly fell out of our seats. We couldn’t stop laughing, and to make it worse, the woman at the table across from us started screaming because a huge grasshopper was hopping around on her table, and as we watched it landed in her stein of beer.

We seldom ate at restaurants on our trips, but carried sandwich-makings. We hadn’t thought to take water with us in the car. Somewhere in the middle of the desert we found a little one-room restaurant. We were shocked to learn that a glass of water cost $5! Again, we splurged.

When we got to Colorado, near where Hal had once worked on a ranch, Hal wasn’t feeling well. At first we thought he was just tired, but then we realized he had fever. We found a hotel to spend the night, and he took a cold shower, thinking it would make him feel better. (Later he thought it had put him in shock.) I could tell he was very sick, and though we didn’t have a thermometer, he evidently had a very high temperature. I told him later that sleeping with him that night was like sleeping with an electric heater. I didn’t get much sleep. I wondered what we would do with him so sick far from anybody we knew—and I couldn’t drive at that time! The next morning we inquired about staying another night, but decided it was too expensive. We left at 11:00, check out time, and though Hal still had a temperature, he got steadily better as we went on our way.

When we made it to Long Beach, my uncle traded cars with us. He said he was getting ready to trade in his 1958 Pontiac and could trade in our Chevy just as well. (By the way, that Pontiac served us for many miles of deputation, and when we were able to buy a new Carryall, or Suburban as they are called now, to take to Central America, we gave the Pontiac to my brother David and his wife. They used it for their deputation and then drove it to Central America to begin their missionary work!)

When we finally had the needed support, I was eight months pregnant, so I flew to Nicaragua and stayed with my parents while Hal drove down in the Carryall, but that is another story.