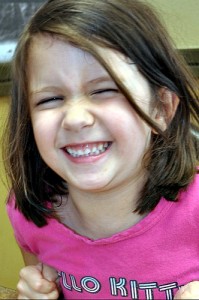 The things the kids say continue to amuse me.  I suppose so many times their words are funny because as adults we’re thinking the same thing, but don’t say it out loud or wouldn’t think to say it in quite the same way.

One day Bobby was crying incessantly.  Grace said, “Mom, he’s like  your doll only…he needs one of those buttons so you can turn him off.”  That would come in handy now wouldn’t it!

The other day I served the kids one of those unhealthy buy, heat and serve type lunches.  It was something new that I only bought because I had a coupon for it.  They were all very skeptical.  It was quiet for a few moments.  Then Grace said very matter of factly, “It’s not my most favorite meal in the world.”  Had I just spent four hours cooking I probably wouldn’t have seen the humor in that statement, but as it stood I had a grand laugh.  Nope it certainly wasn’t my most favorite meal in the world either!