Here are some recent quotes that I’ve enjoyed from our third born. 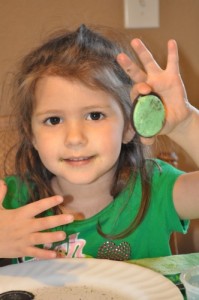 Out of the blue Grace asked, “Mom, who borned you?”  Now that’s a great question, but I can’t remember my two older girls ever pondering the thought.

Then a little while later she asked, “Are we all going to raise from the dead?”  My first answer was to say no, because I thought she was asking if we would all be raised from the dead like Jesus was.  Jason however said yes and explained that the dead in Christ will all rise.  I’m not sure how much of this she understood…

A few days later she said to no one in particular, “Little Jason wasn’t the last one borned.  The baby that died was the last one borned.”  She brings up our little one in heaven more than the rest of us.  It always takes me a little bit by surprise and I wish I could get into her little head to see what she’s feeling.

And my favorite:  Jason told her to do something and she responded, “Okay Daddy Paddy!”  That one had me rolling.  I don’t think she was being disrespectful at all.  She’s just funny!  I’m not sure he would appreciate me referring to him that way though…Daddy Paddy…Haaaaa!