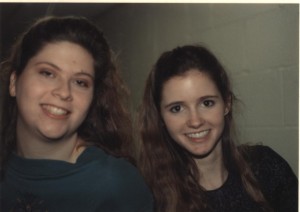 I have never been very coherent when I first wake up.  I’ll be the first to admit that!  One particular time when I was in college, I had gone to bed early and was in a deep sleep, but woke up needing to go to the bathroom.  My best guess was that it was three or four in the morning.  I was afraid that if I got up, I wouldn’t be able to go back to sleep, but I finally realized that the almost quarter of a mile trek to the bathroom was inevitable.  I waddled out of bed and with eyes half closed made it all the way to the end of the hall where the bathrooms were located.

The lounge was right by the bathroom, and as I stumbled out, I heard lots of voices.  I stood in the door way gaping at the people in the lounge and, in my zombie state, wondering what in the world they were doing there in the middle of the night–though in reality it was only a little before midnight.  About then one of the girls noticed me standing there gawking.

“Esther, what is wrong?” my friend gasped.  The room became silent with all eyes on me.

The only thing I could think of was that if I stayed to explain, I’d never be able to get back to sleep.  So I turned around and started sprinting to my room (as if that wouldn’t wake me up).  My friend, concerned about me, started chasing me down the hall followed by the rest of the girls who wanted to know what was going on.

I was almost to my room at the very end when the door to the outside slammed shut with a loud bang!  I jumped about three feet in the air, turned and ran back toward the group of girls that were chasing me and jumped on the first one I met, hugging her around the neck.  Realizing that the door had merely slammed and there was no impending doom, I noticed the shock and disbelief on everyone’s face, and the whole situation struck me as hilarious.  I started shrieking with laughter as I turned her loose, waddled back to my room, and went right to sleep, leaving the group of girls standing in the hall shaking their heads and shrugging their shoulders.

Should you happen to run into me in the middle of the night, just pretend not to notice.  You’ve been forewarned!