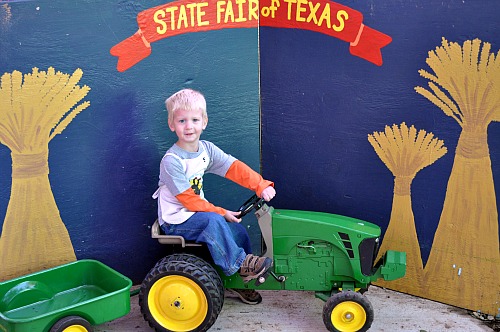 Jason took a day off and took us all to the Texas State Fair on a Wednesday, when it was cheaper and significantly less crowded.  It was such an exciting day and my husband seemed to be getting into the thrill of things with the rest of us.  Maybe it was because I told him I was paying for it with our blogging money, but I’m not sure!  😉

First of all, Jason found someone selling parking for $5 rather than the Fair’s charge of $15.  Thankfully, it wasn’t too far from the gate.  Do I have to remind you that I was eight months pregnant?  I found it kind of scary, but since I knew we wouldn’t be walking back in the dark I kept my mouth shut.  My man would protect me!

We had hauled in our cans for the Kroger food drive, and with my free teacher ticket, we paid a total of $10 to get in.  Woo hoo!

The instant we walked in the gates, Jason started talking about getting a Fletcher’s corny dog…right then?  I talked him out of it.  We had just gotten there, and it was still breakfast time.  But the irony was not lost on me.  It’s usually ME wanting to get something and HIM talking me out of it!

We started at the Little Farm where the kids actually go around and “farm,” cashing in their earnings for a real snack at the end. Oh, it was such a gorgeous cool fall day! 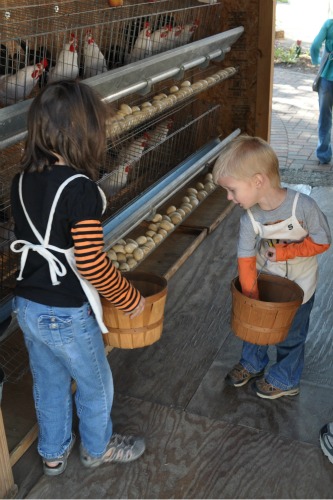 The kids and I especially love the animal shows, but my favorite thing is trying all the samples in the Food Pavilion!  Have I mentioned that I love food?  Then we headed to the Backyard Circus where the girls love to participate and then collect their coupons for free milks. 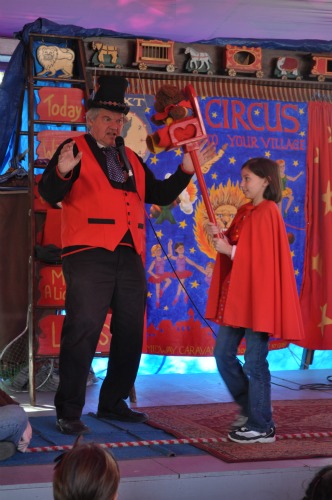 With coupons in hand, that was the best time to eat our packed lunch along with our must-buy corny dogs. 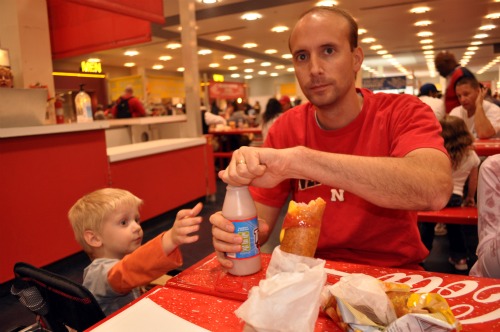 As we were walking around, I noticed I recognized a particular place.  I was swinging Joy’s hand as she skipped along, and I began telling her, “Oh, the very first time we came to the Fair I bought a plate of Mexican food at that place and then sat down right there to eat it.”  Then without thinking I added, “And Dad was so mad that I spent his money!”

Then I heard a vendor nearby yell out,  “Honey, they’re always mad when we spend their money!”  And that was my laugh of the day!

We got there at ten when the Fair opened, and I did pretty well with all the walking all day, but when it came to three o’clock, I was done.  I mean, I could hardly walk.  My husband, usually ready to leave hours before the rest of us, kept mentioning all the things we hadn’t done and asking why we didn’t try to go to such and such a place before we left.  I put up a good front for about another half hour, but then declared the day over.  “Honey, you don’t understand. Every step hurts so much now that I want to cry.”  With that we hauled a downcast crew of little Irishes back to the van located in the creepy area of Downtown Dallas.  To my surprise, everything was still intact!

I felt guilty for being the one to end the fun.  In fact, I felt bad about it until the next day at my doctor’s appointment when I told her that I was tired because we had gone to the Fair the day before.  “Oh, how long did you last?” she asked.

“Well, we got there at ten and left about three thirty.”

She stopped what she was doing and looked at me like I was crazy, “I can’t believe you lasted that long.  I thought you were going to say two hours!”  So I felt much better!

Psst!  I am thrilled to be nominated for The Funniest Homeschool Blog.  Follow this link to cast your vote!